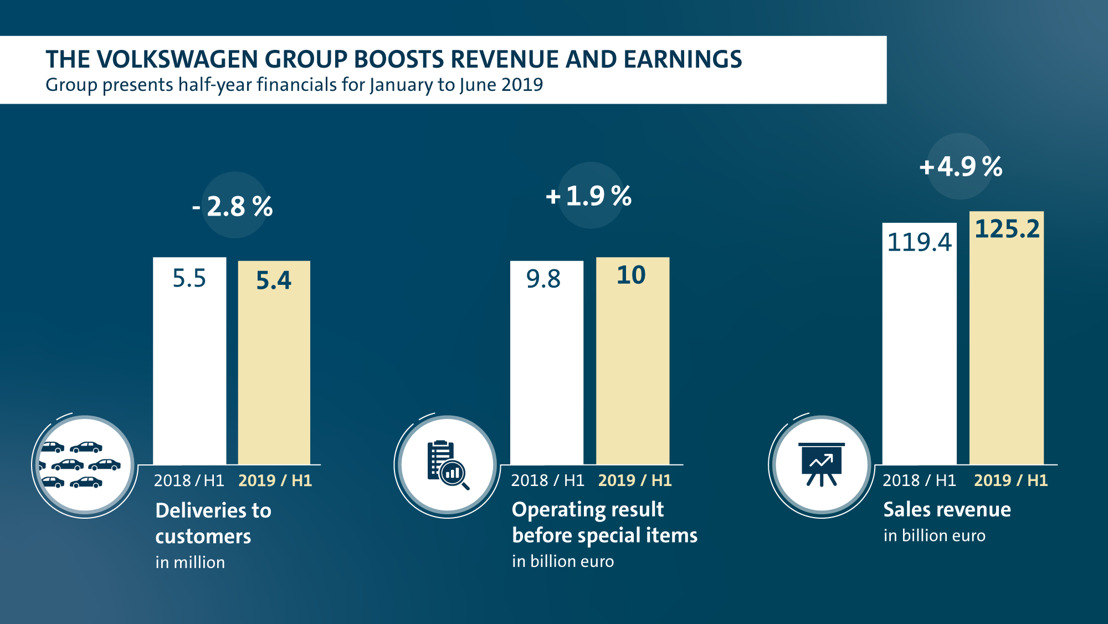 Wolfsburg (Germany), July 25, 2019 - The Volkswagen Group has confirmed its targets before special items for the year as a whole. In the first six months of the current financial year, the sales revenue of the Volkswagen Group grew by 4.9 percent to €125.2 (119.4) billion compared with the first half of 2018. Despite the negative development in volumes, sales revenue was boosted especially as a result of improvements in the mix and price positioning in the passenger cars business area as well as the good business development in the Financial Services Division and at TRATON. The operating profit before special items improved by 1.9 percent to €10.0 (9.8) billion and operating return on sales before special items amounted to 8.0 (8.2) percent. Improvements in the mix and price positioning as well as lower special items compared with the previous year were more than sufficient to compensate for higher fixed costs, negative currency trends and lower vehicle sales. As a result, the operating profit of the Volkswagen Group in the first half of 2019, at €9.0 (8.2) billion, was 10.3 percent higher than the figure recorded for the first half of 2018. The operating return on sales rose to 7.2 (6.8) percent. The profit of the Chinese joint venture companies, which is included in the result of equity-accounted investments, fell only slightly in a shrinking general market. The pre-tax profit rose by 6.5 percent to €9.6 (9.0) billion. The net liquidity in the Automotive Division was €15.9 billion. Frank Witter, Member of the Board of Management of Volkswagen AG responsible for Finance, said: “In the first half of the year, the Volkswagen Group performed very well in a generally weaker overall market. The development of sales revenue and profit in the first six months is gratifying. We also confirm our outlook for the Volkswagen Group for the year as a whole.”

The sales revenue of the Volkswagen Passenger Cars brand in the first six months 2019 increased by 3.4 percent year-on-year to €44.1 billion. Operating profit before special items rose to €2.3 (2.1) billion. Improvements in the mix and price positioning as well as positive cost developments more than offset the negative impact of lower volumes and exchange rates. The diesel issue gave rise to special items of €–0.4 billion in the reporting period.

At the Audi brand, the new allocation of the multibrand sales companies contributed to a decline in sales revenue to €28.8 (31.2) billion. Operating profit was down on the prior-year period at €2.3 (2.8) billion. Negative effects resulted from model ramp-ups and phase-outs, WLTP-related lower sales volumes, higher upfront expenditure for new products and technologies, cost increases and exchange rate effects. Improvements in the mix and product costs had a positive impact.

ŠKODA boosted sales revenue by 10.8 percent year-on-year to €10.2 billion. The increase in sales revenue was especially the result of the assumption of regional responsibility for India. Operating profit rose by €3 million to €824 million. Volume increases and pricing measures were sufficient to compensate for negative exchange rate effects and cost increases.

At the SEAT brand, sales revenue reached €6.3 billion, exceeding the good figure of the prior-year period by 8.3 percent. Volume and mix improvements boosted operating profit by 1.9 percent to €216 million, more than offsetting the negative impact of cost increases.

The Bentley brand boosted sales revenue to €835 (757) million. Operating profit increased to €57 (–80) million. In addition to volume, cost savings in connection with the ongoing efficiency program as well as mix effects and exchange rate trends had a positive impact.

Porsche Automotive increased sales revenue to €12.2 (11.2) billion. Operating profit before special items rose by 2.5 percent to €2.1 billion, primarily due to volume effects. In addition, product costs had a positive impact, while exchange rate trends had a negative influence. The diesel issue gave rise to special items of €–0.5 billion in the reporting period.

The sales revenue of Volkswagen Commercial Vehicles rose by 2.6 percent to €6.5 billion. Despite higher volumes, lower product costs and improved margins, operating profit declined by 10.8 percent to €506 million, primarily on the back of higher fixed and development costs as well as a deterioration in the mix.

Scania Vehicles and Services lifted sales revenue to €7.1 (6.3) billion. Operating profit improved to €828 (618) million, which was mainly attributable to higher vehicle sales, an improvement in the genuine parts and service business and favorable mix effects and exchange rate trends. Cost increases had an offsetting effect.

Power Engineering generated sales revenue of €1.9 (1.6) billion. At €42 (68) million, the operating result declined due to expenses.

Volkswagen Financial Services boosted sales revenue to €18.0 (16.7) billion. At €1.3 billion, the operating profit was slightly above the prior-year figure.

Net liquidity in the Automotive Division at €15.9 billion

The Group continues to expect that deliveries to Volkswagen Group customers in 2019 will be slightly higher than in 2018 despite market conditions that remain challenging. The main challenges relate to the uncertain economic environment, the growing intensity of competition, volatile exchange rate trends and the more stringent registration requirements. It is also expected that the sales revenue of the Volkswagen Group and of the passenger cars and Commercial Vehicles business areas will be up to 5 percent higher than in 2018. As regards the operating profit before special items of the Group and the passenger cars business area, an operating return on sales between 6.5 and 7.5 percent is anticipated.

In the Commercial Vehicles business area, an operating return on sales between 6.0 and 7.0 percent is expected. In the Power Engineering business area, a significant increase in the operating loss compared with 2018 is expected, with a slight increase in sales revenue. In the Financial Services Division, it is anticipated that operating profit will reach about the same level as in 2018, with a moderate increase in sales revenue. Including special Items, it is predicted that the operating return on sales of the Group and the passenger cars business area will be at the lower end of the target corridor in each case.

Note: This text is available at www.volkswagen-newsroom.com.