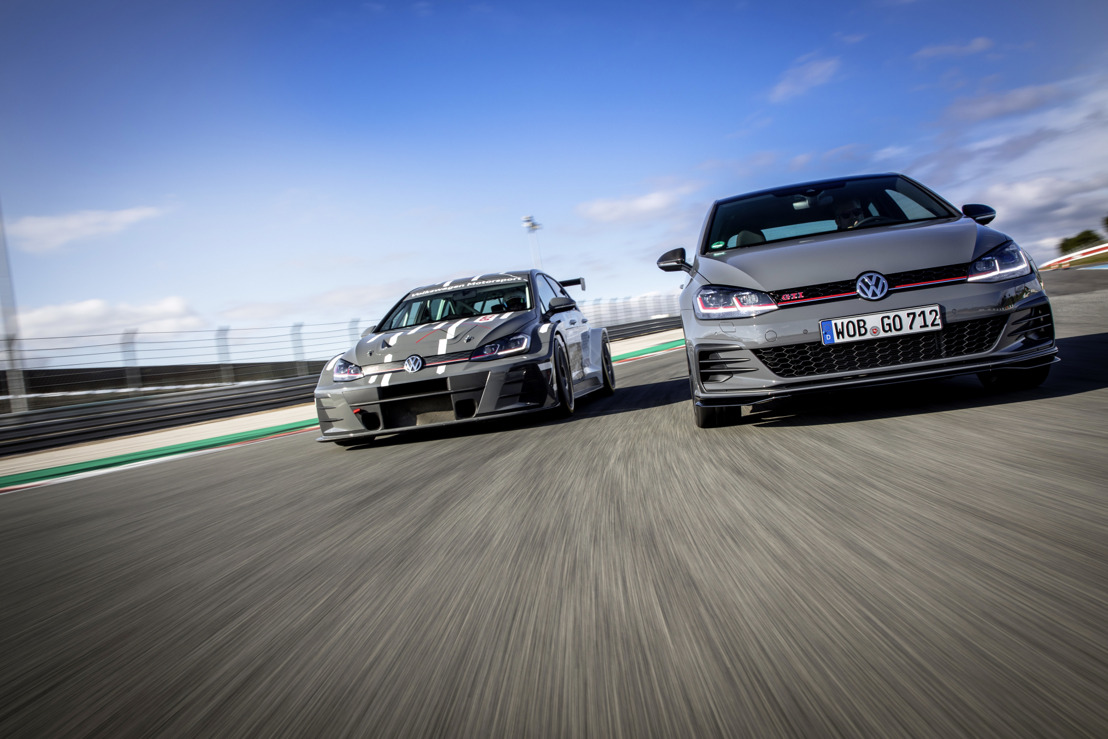 Golf GTI TCR – The next evolutionary stage of an icon

Wolfsburg / Portimão, January 2019. The Golf GTI: the world’s most suc- cessful compact sports car. Nearly 2.3 million of this icon have been pro- duced and sold over seven generations. Since the debut of the original GTI in 1976, the DNA of this Golf model has never changed: compact hatchback body, low weight, agile 4-cylinder, front-wheel drive, crisp suspension, red stripes in the radiator grille and classless, confident design. Still, the Golf GTI was repeatedly refined and perfected from generation to generation. Now, Volkswagen is launching a new evolutionary stage of this cult compact pol- ished like a rough diamond: the Golf GTI TCR1, which reaches speeds of up to 260 km/h (optional). The special edition is a motorsport-inspired road ver- sion of the racing car of the same name and two-time overall winner of the international TCR race series. The successful touring racing car’s genes also make the new GTI top model unmistakeable: Design, power and perfor- mance are intrinsic to the pure sports car doctrine. The 2.0 litre turbo engine of the new Golf GTI TCR delivers 213 kW / 290 PS (at 5,400 to 6,400 rpm). This makes it 33 kW/45 PS more powerful than the current Golf GTI Perfor- mance2/3. Even at 1,000 rpm – a touch above idle speed – 200 Nm of torque is available in the Golf GTI TCR. The maximum torque of 380 Nm lies between 1,800 and 5,300 rpm – this wide torque plateau ensures equally superior as well as agile drive characteristics.

7-speed DSG and additional radiators. Power is transmitted to the front wheels as standard via a 7-speed dual-clutch gearbox (DSG) and a locking differential. To provide appropriate cooling to handle the increased engine power in any situation, the Golf GTI TCR has been equipped with two extra water radiators in front, the same as the all-wheel drive Golf R4.

Up to 260 km/h. The factory maximum speed is 250 km/h, but this can be increased to 260 km/h by opting to remove the electronic Vmax limiter. Re- gardless of where the digital speedometer needle (standard Active Info Dis- play) stops, the roof edge spoiler ensures the necessary downforce at the rear axle. The Golf GTI TCR completes the sprint to 100 km/h in 5.6 seconds. The efficiency of the four-cylinder four-valve engine combined with a petrol particulate filter is demonstrated by the combined consumption (NEDC): 6.7 l/100 km. The new Golf GTI TCR has been available for order since January of this year.

Newly designed 19-inch alloy wheels in “Reifnitz” and “Pretoria” designs are optionally available. Lurking behind the large alloy wheels are perforated brake discs together with special brake pads to slow the racing offshoot just as confidently as its paragon on the racetrack.

Differential lock and four driving profiles. Always on board too: the front- axle locking differential well known from the Golf GTI Performance (optimis- ing traction and handling on fast bends) and the driving profile selection with the modes “ECO”, “NORMAL”, “SPORT” and “INDIVIDUAL”. The latter enables the specific tuning of the steering, engine performance curve and gearbox as well as (optional) Dynamic Chassis Control (DCC).

Vmax removal and DCC in one package. As an optional extra, particularly enthusiastic drivers can push the design of the Golf GTI TCR even further in the direction of the racetrack – just by selecting the associated package. Op- tion no. 1: The 19-inch “Reifnitz” wheels in Black matt with 235/35 R 19 tyres. In this case, the package automatically includes: removal of the Vmax limit, and adaptive Dynamic Chassis Control (DCC) including running gear that is lower by 20mm compared with the normal running gear (five millimetres less as compared to the GTI running gear) as well as a special sports adjustment of the front axle and rear axle shock absorbers. It allows the features of the electrical shock absorbers to be adjusted at the touch of a button and a choice of a sporty, comfortable or normal chassis configuration as desired and depending on the situation. Option no. 2: The 19-inch “Pretoria” wheels in glossy Black with 235/35 R 19 sports tyres (semislicks) for the racetrack. This option also includes removal of the Vmax limit, a sports version of the rear shock absorbers and adaptive Dynamic Chassis Control (DCC), as well as additional anti-theft wheel locks.

Design transfer from racing. The Golf GTI TCR’s distinctive look is also proof of its outstanding position. At the front, the most powerful GTI of the current model programme has a sharply cut, high-gloss black splitter as an addi- tional front spoiler, as is common in motor sport. Also new: the high-gloss black sill caps in the side panel; their lines are optically continued into the rear section. Here they meet a strikingly designed diffuser – similar to the side sills and the front splitter in the same glossy black – and the left and right exterior integrated single tailpipes of the exhaust system. Up in the rear, however, the dynamic line of the roof section transitions into the shiny black spoiler.

“Pure Grey” and classic GTI colours. New for the Golf GTI TCR is the colour “Pure Grey”. The other colours have been GTI classics from the start: “Pure White”, “Tornado Red”, “Deep Black Pearl Effect” and “Oryx White Pearl Ef- fect”. Combined with “Pure Grey”, “Pure White” and “Tornado Red”, there is the option to order the roof in the contrasting colour “Black”. Also black: the exterior mirror caps (optional Carbon look) and the “TCR” lettering above the sills. On request, the vehicle flank on the left and right of the B-pillar is ad- ditionally individualised by a striking honeycomb decor foil. The Golf GTI TCR has a particularly inviting effect when opening the front doors: the TCR logo is then projected onto the asphalt. The exterior features of the classic GTI insignia include the legendary red stripes in the radiator grille and the stand- ard LED headlights. Elegantly toned: the dark red LED rear lights.

Interior with exclusive features. Drivers and passengers are seated in top sports seats, whose microfibre/fabric covers were crafted specially for this version. Anthracite-coloured microfibre features include the flanks of the seat and backrest. The striped centre seat panels (in fabric), however, feature the contrasting colour “Flashred” on a black background. Also featuring this red colour: the stitching on the seats, the centre armrest (front) and head- rests, as well as seat belt edges and contrasting seams on the door trims, the DSG gearshift and the three-spoke sports steering wheel. This is not the only reason why the latter conveys a pure racetrack feeling: As an analogy to the TCR racing series, the leather cover is specially imprinted (perforated leather) at the 3 o’clock and 9 o’clock positions, as well as with a red 12 o’clock mark. Like the seats, the door inserts and the gearshift cover are made of microfibre. Meanwhile, the “Flashred” of the seats and seams is in- corporated by the standard ambient lighting in the door sills and the colour graphics of the likewise free-of-charge “Composition Media” infotainment system and the optional “Discover Media” and “Discover Pro” navigation sys- tems, respectively. New decor brings the interior to perfection.

TCR – The racing series and the racing car

Worldwide motorsport. The TCR series born in 2015 combines top-class rac- ing with series-based technology. 4- and 5-door vehicles with 2.0 litre petrol or diesel motors are permitted, driven mostly by private teams. Besides the worldwide WTCR (FIA World Touring Car Cup), numerous national racing as- sociations host TCR race series. The competition model – the Golf GTI TCR – is one of the most successful racing touring cars of today: In the interna- tional TCR series, Stefano Comini (2016) and Jean-Karl Vernay (2017) each won the driver title, with further title successes in TCR Asia (2016 & 2017) as well as in the TCR Middle East, TCR UK, TCR Asia and TCR Scandinavia (2018). In addition, the Golf GTI TCR has been honoured as “Model of the Year” out of all TCR racing cars. Volkswagen Motorsport has built more than 100 units of the racing car, manually and on a small scale, and delivered them to cus- tomer teams since 2016. Price ready to race: from 95,000 euros plus sales tax.

Turbocharged engine legend. Under the bonnet of the racing car is the base

Equipment – the configuration of the Golf GTI TCR

Optional equipment for the TCR

General features of both Golf GTI models in 2019 (excerpt)