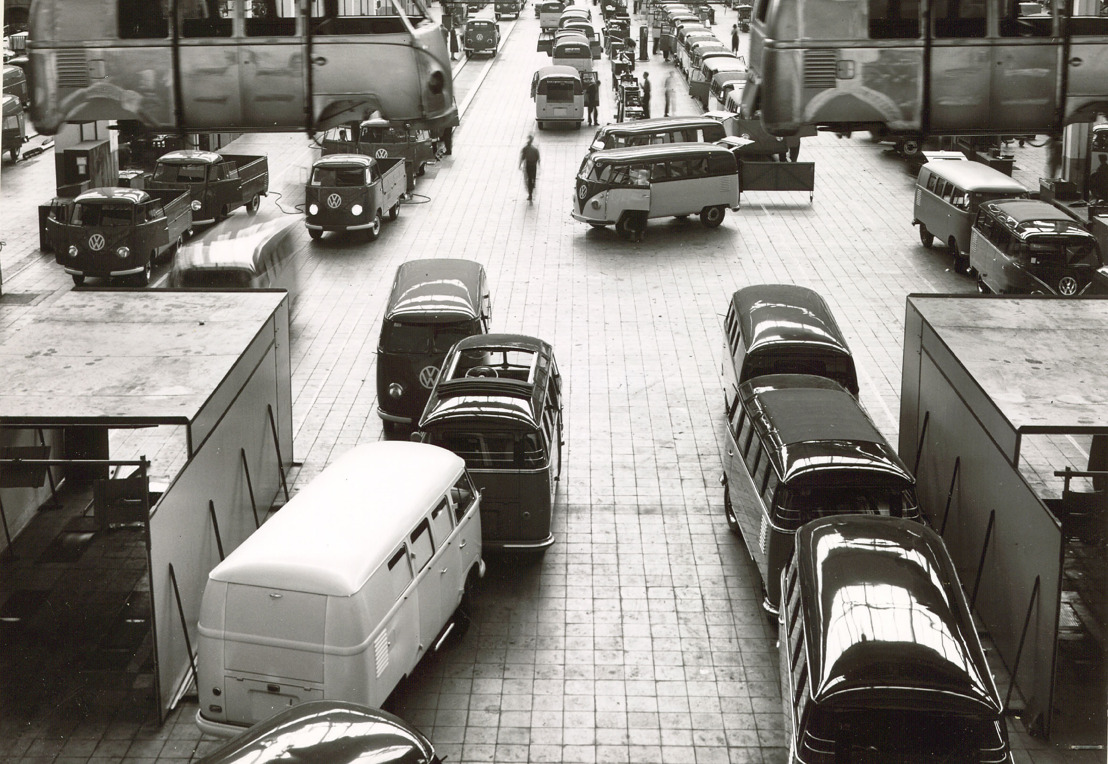 Hannover, 5 March 2021 – 65 years old, but still way off retirement: the legendary VW T2, lovingly called the Bulli by its fans, has been produced at Volkswagen Commercial Vehicles’ plant in Hannover-Stöcken since 8 March 1956. Since then more than 9 million Bullis have been produced at the factory. The production operation at the plant is currently being extensively modernised and reorganised. With the launch of the new Multivan this year and with the ID.BUZZ (in 2022), the Hannover factory will for the first time be making vehicles with conventional, plug-in hybrid and fully electric drive systems.

Carsten Intra, Chairman, Brand Management Board, VWCV: “We can look back with pride on what we have achieved here in Hannover. The history of the plant is as unique as the Bulli itself – and as the people who have built millions of these vehicles here. At the same time we're looking to the future on this site: with the launch of the new Multivan this year and with the ID.BUZZ from 2022, we’re completing our modern, attractive range of vans, MPVs and leisure vehicles for a broad clientele. In fact, the right vehicle for everyone.” In addition, starting in 2024, premium electric vehicles (D-SUVs) will be produced in Hannover for other group brands. “The plant is thus an exemplar for the transformation of the entire brand. Volkswagen Commercial Vehicles and the Group underlined this recently with the investment of 680 million euros for the production of the D-SUV.”

Bertina Murkovic, Chairwoman of the VWCV Works Council:
“Five years ago, when we celebrated our plant's 60th anniversary, everything surrounding it was truly different: a family celebration and Bulli exhibition in the historic museum were great events for saying thank you. Thank you to our Bulli makers in Hannover, who breathe life into our products. The Transporter, the Bulli made us great as a brand. Precisely because we have diversity in our genes: products for practically every commercial use on the one hand and for every leisure activity on the other. And it is exactly this diversity that is our future: the T6.1, the new Multivan and soon the ID. BUZZ. That is the cornerstone of our brand and of our site and we can, Hannover can, be proud of it.”

Josef Baumert, Board of Management Member for Production and Logistics, VWCV: “For our new products, we are fundamentally modernizing the factory – without interrupting ongoing production. The body construction for the new Multivan is already in place, for the ID. BUZZ it is currently under construction, more than 1,300 robots will be used here. Starting in 2022, two production lines will run three vehicles in our assembly, each based on a different platform. In doing so, we have laid the foundation for a successful future in Hannover." For the first time, vehicles will be produced on the modular transverse matrix (MQB) like the new Multivan and on the modular electric drive matrix (MEB) like the ID. BUZZ.

In a video message to the workforce, Plant Director Thomas Hahlbohm looks back over six decades and, above all, looks ahead to the tasks over the coming years: “Let us take on the challenges. Just as we at VWCV in Hannover have always done. For the future of our plant and the future of our Bulli. Today, the plant turns 65 - but won’t be retiring for a long time yet.”

Facts and figures on the Hannover plant

Review: The Bulli becomes a symbol of the “economic miracle”

The cinemas are showing Heinz Rühmann as “Charley’s Aunt” while the Elvis Presley hit “Love me tender” is blasting from tiny transistor radios. And the Germans are discovering their love of the car: what becomes known as the economic miracle has arrived. The Volkswagen Beetle is the best-selling car of 1955, and goes on to pass the one-million mark before the year is over. The Bulli is also highly sought after. Production capacity in the main Wolfsburg plant, which has already been building the Bulli since 1950, is by no means sufficient to meet the demand. Bread, beer and burgers have to reach the customers. Consumer goods, too, such as televisions and refrigerators, have to be delivered reliably and as quickly as possible to their buyers. To meet these needs, business people and tradesmen alike need the indestructible Bulli.

At the time, more than 235 cities and municipalities apply to become the new site for the projected Transporter plant. Heinrich Nordhoff, Managing Director of Volkswagenwerk GmbH and later Chairman of the Management Board of Volkswagenwerk AG, wins over the support of the Supervisory Board for his preferred location of Hannover. The main advantages are the presence of the Mittelland Canal in the immediate vicinity and the existence of a marshalling yard. Yet even at the time, Nordhoff recognises: “The value of a company does not come from buildings and machines, or from its bank accounts either. The only valuable thing in a company is to be found in the people who work for it and the spirit in which they do so.”

Construction starts off with 372 employees during a winter that brings much snow. By the end of March 1955, 1,000 workers are already busy on the construction site. As the thaw sets in, planks have to be laid over the soft, muddy ground so that trucks are able to deliver the building materials. On the site itself, a small, makeshift town grows up – with site offices, supply sheds, huts for accommodation and canteen tents. Enterprising traders are also quick to set up here with their sales stalls.

After only 12 weeks, the walls already tower more than four metres high. In continuous operation are 28 giant cranes, while 22 large cement mixers churn out 5,000 cubic metres of concrete each day. All in all, 1,750,000 cubic metres of earth are moved – equivalent to 256,000 lorry loads at the time.

From May 1955, some 2,000 workers are busy on the gigantic building site every day. Pouring the concrete uses up 600,000 square metres of supporting timber. To put this in perspective: "That would have been enough to build a one-metre-wide wooden walkway from Wolfsburg to Basel", writes a contemporary journalist.

At the same time, Volkswagen is already training new employees for the Transporter production. Every day at 4.10 am, a specially chartered train takes them from the central station to Wolfsburg, where they receive instruction in producing the Bulli. 3,000 employees are intended to ensure that production gets off to a smooth start. Within only a few weeks, bodywork constructions has been set up, in February 1956, the multitrack ten-kilometre rail connection to the plant is also ready.

On 8 March 1956, series production of this future symbol of the "economic miracles years” starts up in Hannover-Stöcken. By 1967, when production of the first Transporter generation comes to an end, 1.8 million Bullis have come off the line in Germany.

To date more than 10 million vehicles have been produced in the VWCV plant in Hanover-Stöcken. Currently being made at the plant is the T6.1 and before the end of the year production will begin of the new Multivan (with conventional drive system and as a plug-in hybrid). Next year, Volkswagen Commercial Vehicles’ first fully electric vehicle will be produced in Hannover: the ID. BUZZ. The story of the Bulli from Hannover continues.


About the Volkswagen Commercial Vehicles brand:
‘We transport success’. As a stand-alone brand within the Volkswagen Group, Volkswagen Commercial Vehicles (VWCV) is responsible for the development, construction and sales of light commercial vehicles. They include the Transporter, Caddy and Amarok ranges, which are produced in Hannover (D), Poznań (PL), Września (PL) and Pacheco (ARG). Our vehicles transport construction workers, families and adventurers, bread rolls, parcels and surfboards. Every day they help countless people all over the world to do a good job, they operate as mobile workshops and they bring paramedics and the police to wherever they are needed. Within the Volkswagen Group, Volkswagen Commercial Vehicles is also the lead brand for Autonomous Driving, Mobility as a Service (MaaS) and Transport as a Service (TaaS), and in future will therefore be developing and producing corresponding Special Purpose Vehicles (SPV), such as robo-taxis and robo-vans. In this way we are transporting an entire society, with all its requirements for clean, intelligent and sustainable mobility. Working at the company’s sites around the globe are more than 24,000 employees, including around 15,000 at the Hannover site.