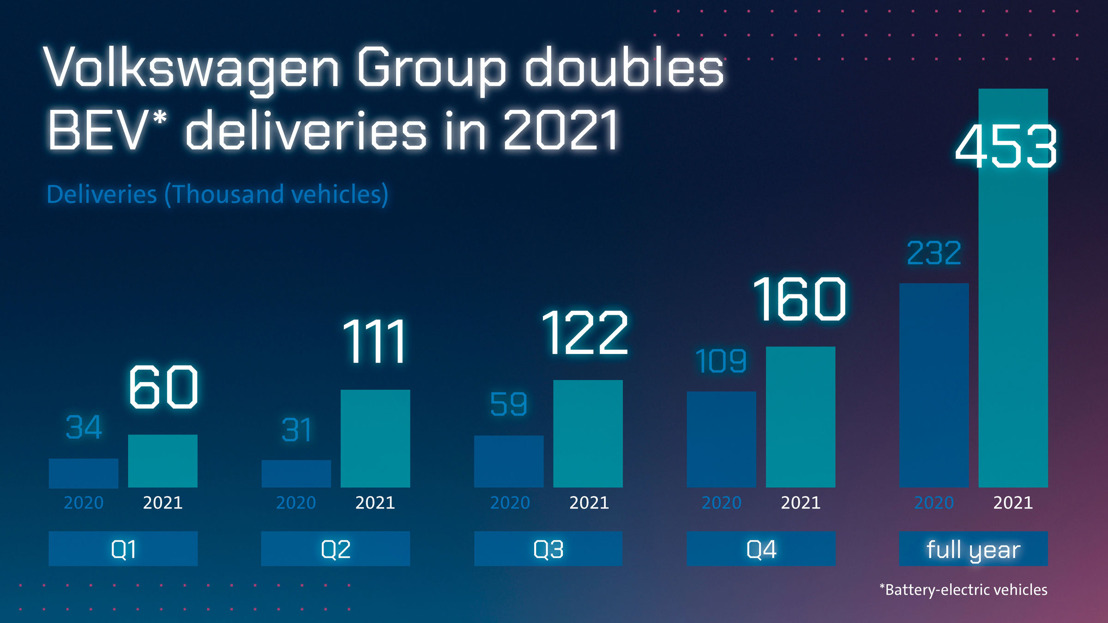 Volkswagen drove forward its transformation into a sustainable, software-centric mobility group in the year now ended and approximately doubled its BEV deliveries year-on-year to 452,900 units. These now account for 5.1 percent of total deliveries, up from 2.5 percent in the previous year. The Group is the European market leader for battery-electric vehicles by a large margin and achieved the second-largest share of the key US market with about 7.5 percent. In China, 92,700 BEVs were delivered, more than four times the figure for 2020. Sales of plug-in hybrids worldwide also rose significantly to 309,500 units (+61 percent). In total, the Group delivered 8,882,000 vehicles to customers around the world. As forecast, the global semiconductor shortage led to a slight decrease of 4.5 percent versus 2020 despite high customer demand and full order books.

Christian Dahlheim, Head of Volkswagen Group Sales: “2021 was very challenging due to global semiconductor shortages, but we nevertheless consistently implemented our clear future course towards NEW AUTO. The doubling of our battery-electric volumes and the high demand for all our vehicles clearly show that we are on the right track. This is something we will build on in the current year and continue to drive forward our transformation.”

Figures for 2021 show how the Volkswagen Group’s business model is changing. The sources of income will progressively shift further from conventional petrol engines to zero-emissions electric cars and from sales of vehicles to software and mobility services, underpinned by the key technology of autonomous driving. The Volkswagen Group projects that in 2030 one in two cars sold worldwide will be purely electric.

Systematic electrification of the product portfolio is also reflected in the investment planning for the years 2022 to 2026 that the Volkswagen Group presented in December. These plans provide for an increase in capex and development costs for e-mobility of around 50 percent compared with the previous planning, giving a total of EUR 52 billion.

The Group’s top-selling battery-electric models in 2021 were (in units):

Deliveries in the regions developed as follows in 2021:

A total of 3,518,700 vehicles were delivered in Europe (–2.7 percent). In Western Europe, 2,860,400 customers took possession of a Group brand vehicle (–2.7 percent). Battery-electric vehicles were very popular in this region, accounting for 10.5 percent of Group deliveries in Western Europe (2020: 6.2 percent). This makes the Group the clear BEV market leader in Europe. Demand for BEVs was even somewhat stronger in Germany, the Group’s home market, where battery-electric vehicles made up 11.4 percent of Group deliveries (2020: 5.9 percent). Here, a total of 991,900 vehicles across all drive systems were handed over to customers (–9.6 percent). Deliveries in Central and Eastern Europe declined by 2.8 percent to 658,300 units.

In North America, 908,400 customers took delivery of a new Group brand vehicle, a significant increase of 15.6 percent. This positive development was driven in particular by the USA, where deliveries rose by 16.9 percent to 671,800 units. The Group tripled its BEV deliveries in the largest North American market year-on-year to 37,200 vehicles, making it the number two for battery-electric vehicles.

The Group also lifted its delivery volumes year-on-year in the South America region. A total of 514,600 vehicles were handed over to customers, an increase of 5.1 percent. In Brazil, the region’s largest market, deliveries hovered around the prior-year figure at 376,500 units (–0.3 percent).

In the Asia-Pacific region, deliveries fell by 12.4 percent year-on-year to 3,610,600 units. China, the Group’s largest single market, was among the hardest hit by the semiconductor shortages. Here, deliveries were down by 14.1 percent to 3,304,800 units. The electric offensive also bore fruit in this region, leading to the strongest volume growth among Group BEVs, which rose more than fourfold to 92,700 vehicles.