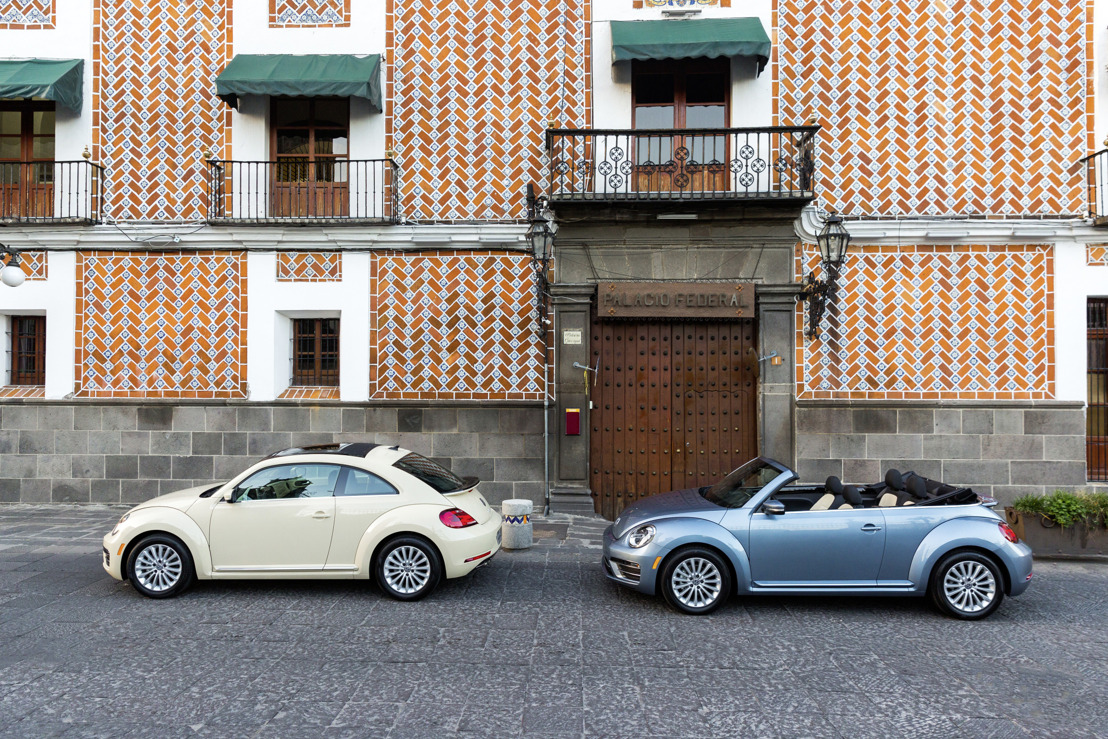 America has always been one of the markets in which the Beetle has been very successful and the cult Volkswagen has many followers and fans. As a tribute to this icon, Volkswagen of America, Inc. is presenting two exclusive special models to its customers at the Los Angeles Auto Show: The Beetle Final Edition and the Beetle Cabriolet Final Edition. Both versions have extensive equipment and high-quality decorative elements.

This special series is inspired by the “Última Edición” of the VW Beetle, from which the legendary Volkswagen was finally adopted in the year 2003. Like the “Última Edición”, the “Final Edition” is also available in the exclusive colours of Beige (Safari Uni) and Light Blue (Stonewashed Blue). The Final Edition models are also available in Pure White, Deep Black Pearl Effect and Platinum Grey. The fabric roof of the Cabriolet is designed in a classy brown colour. The Final Edition models can also be recognised by the “Beetle" lettering on the tailgate.

The Beetle special models are powered exclusively by a 130 kW/176 PS 2.0 TSI engine in combination with a six-speed automatic gearbox.

In the beginning there was a vision, a dream like so many in the fabled land of opportunity: at the American Design Center, which was established in 1991 by Volkswagen in Simi Valley in southern California, employees are working on a vehicle with alternative drive technology. What could it look like? They know that in the US, the original Beetle is still considered the epitome of a Volkswagen – an icon and an enduring symbol of quality. So designers Freeman Thomas and J. Carrol Mays develop the rounded shape of the Beetle, into a form reflecting tradition and modern day design. At the Detroit Motor Show, in January 1994, they ultimately unveil their “Volkswagen Concept One,” a car shaped like a hemisphere, flowing forms, compact, different, retro – a sensation and the birth of the New Beetle.

Allow me to introduce: the New Beetle

The positive response by the public and trade media encourages Volkswagen to pursue the idea further. In March of that same year, the brand presents a convertible based on the “Concept One” in Geneva, followed in autumn 1995 at the Tokyo Motor Show by a version in which the design is better adapted to the technical requirements of automotive production. Before November is over, the decision is made to bring the “Concept One” into series production. Five months later, visitors at the Geneva Motor Show make the acquaintance of a revised concept car whose glass roof opens electrically – the New Beetle.

From that point on, it will take just two more years until the first units of the New Beetle successor go on sale in the US in March 1998, and just another half year afterwards the New Beetle can be ordered in Europe. As the US has played a central role in the development of the new model from the outset, Volkswagen has the car manufactured at its Puebla plant in Mexico.

The New Beetle is in perfect tune with the spirit of the late 1990s. The Internet and budget airlines are bringing the world together; the perceived stagnation of the 1980s, immortalized in the book “Generation Golf” by German author Florian Illies, is giving way to a global resurgence.

Techno comes into fashion, as does – the other side of the coin, as it were – grunge music. The US is governed with charm and charisma by Democrat Bill Clinton. With the election of Gerhard Schröder as German chancellor in 1998, the Kohl era comes to an end, and a dinosaur of the German small screen bids farewell with the last episode of “Derrick.” Now all the world is watching “Ally McBeal” and “Sex and the City.”

The New Beetle is a perfect fit for this time of unbridled optimism. It stands for a dynamic lifestyle, an easy-going confidence. It is the car on which the brain’s pleasure center and its voice of reason are in complete agreement. Many are particularly taken with the car’s extravagant appearance, which combines a sense of tradition with a decidedly modern design language. One major German daily taps into the zeitgeist pointedly when it writes that the New Beetle is an object of desire in sheet metal: the rebirth of the car out of the spirit of the fitness studio.

Yet for all the swooning over its design, the New Beetle is a car that fulfills all the modern requirements in terms of safety, comfort, day-to-day usability and fuel consumption. It’s also a trendsetter: after the success of the New Beetle, other manufacturers discover the allure of retro models for their brands as well.

Thanks for the flower

The New Beetle technically is based on the Golf IV. The engine is transversely mounted in front rather than longitudinally in the rear; the New Beetle shares the platform and many chassis components with the Golf IV. At the start of 1998, two engine versions are available: a gasoline variant with two liters of displacement and 85 kW as well as a 1.9-liter turbo diesel with direct fuel injection. Over time more engine variants are added, eventually covering the entire range from easy-going to sporty driving styles. In 2003, Volkswagen presents the first Beetle convertible with a folding roof and in 2005 a slightly modified model. In the US, the New Beetle enjoys immense popularity from the outset.

Volkswagen’s calculation proves correct: the New Beetle helps Volkswagen boost sales by some 55% in 1998. In 1999, the Group scores its best result in the US in almost 25 years with over 380,000 units sold. By the time of the model change in 2010 / 2011, over half of the 1.2 million units produced are sold in the United States. The “Bug” is what the New Beetle is lovingly called here. Celebrities such as TV host and car fanatic Jay Leno are enthusiastic about the car, while German entertainer Thomas Gottschalk tools around his Malibu neighborhood in his.

Longer, wider and just as cult

By the time Volkswagen releases the second generation of the new Beetle, the car has already reached cult status. It now shares the platform known as the A5 with the other Volkswagen Group models of the compact class. At just under 4.28 meters, it is considerably longer than its predecessor and has added almost nine centimeters to its width as well. That makes for more space in the interior and the luggage compartment. And the new model has a few reminiscences of the classic Beetle as well, particularly in the interior: the glove compartment, hand straps and trim recall the original.

But cult is not necessarily synonymous with sales. Roughly 600,000 units of the Beetle have been sold since 2011. Sales have tapered off in recent years as drivers’ tastes are changing. SUVs are the latest trend, with numerous models from Volkswagen also playing a leading role. The Beetle has not been able to attain the global success of the new “Volkswagen,” the Golf.

Yet not only the die-hard fans of the immortal Bug will see the impending end of the Beetle with a touch of sadness. Production will be stopped in the summer of 2019. The Final Edition, which Volkswagen will reveal at the Los Angeles Auto Show, will certainly soften the blow somewhat.