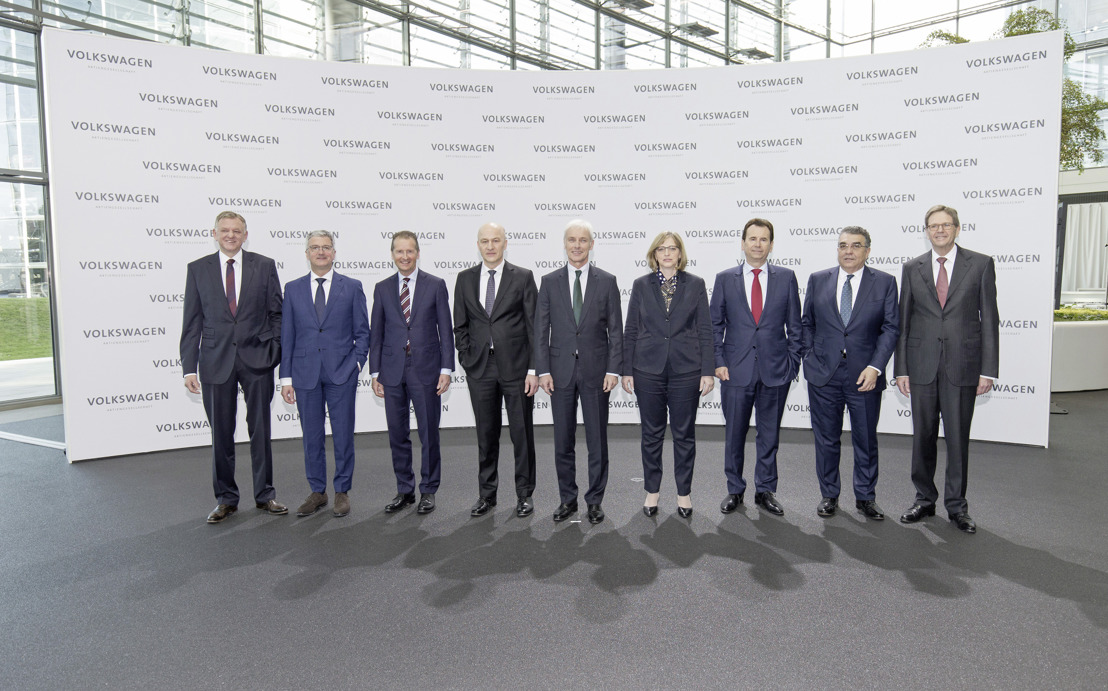 Wolfsburg, March 14, 2017 – The positive result in fiscal year 2016 has given the Volkswagen Group new momentum and optimism as it enters the next phase of its realignment. “The last year was a challenging yet remarkably successful year for us. In 2016 we set the course for the biggest transformation in the history of the company – while at the same time performing better in our operating business than many thought possible. Volkswagen is back on track,” said Matthias Müller, CEO of Volkswagen Aktiengesellschaft, at the presentation of the 2016 annual financial statements in Wolfsburg. Frank Witter, Member of the Board of Management, responsible for Finance and Controlling, emphasized: “This result demonstrates that the Group is financially equipped to bear the consequences of the diesel crisis. All brands contributed to the success of the Volkswagen Group in 2016 by delivering a positive operating result.”

CEO Müller reaffirmed the Group’s clear-cut objective of playing a vital role in shaping the future of automobility. “Volkswagen will remain one of the most successful automakers worldwide in 2025. But we will also be a leading international provider of sustainable mobility and set the standards for new mobility services. And what is at least as important to us: We will be a role model in environmental protection, safety, and integrity,” stated Müller.

In order to accomplish its long-term goal of becoming one of the world’s leading providers of sustainable mobility, the Group launched its ‘TOGETHER – Strategy 2025' future program in 2016. Noticeable progress has been made in all four of the strategy’s core fields of action, said Müller: “The transformation of the core automotive business is on track, the new mobility services business unit is taking shape, our traditionally high innovative strength has been given yet another solid boost and financially, we have the realignment process well under control.”

A number of projects were launched in recent months to bring the new strategy to life. For instance, the implementation of series structure for all of the Group’s major passenger car brands was a milestone in the transformation of our core business.

In addition, numerous forward-looking partnerships got off the ground. The Group is thereby pursuing its entry into the economy segment with strong regional partners: Letters of intent have been signed with Tata Motors in India and FAW and JAC in China. The strategic alliance with Navistar Volkswagen Truck&Bus has opened the door to the important US market for the commercial vehicle segment.

The buildup of new competencies is running at full speed. In this connection, Volkswagen has adopted a multi-stage plan to acquire technological leadership for batteries. This calls for the establishment of a center of excellence to take place this year and the start of pilot production in 2020. In addition, talks are ongoing regarding the development of partnerships in the area of battery cells; a conclusion to the talks is sought for the current year.

The formation of the ‘Autonomous Intelligent Driving GmbH’ under Audi represents a milestone for the Group in the autonomous driving segment. Just a few days ago, ‘Sedric’ was introduced as the Group’s first own self-driving car. The Volkswagen brand’s intelligent driving has been a signal of the Group’s claim to leadership in the fields of electric mobility and digital connectivity since the fall of 2016. This is clearly demonstrated by the 37 competence centers and digital labs that have now been established worldwide to address automobility of tomorrow. Efforts to expand the mobility solutions business into a new, stable pillar of the Group is on schedule – in particular with MOIA, the company newly established in December, and through the strategic partnership with ‘Gett’.

For the current year, the Group aims to step up the pace of its Strategy 2025 implementation: For instance, the SUV campaign already underway will be continued with a total of seven new models. The planned economy vehicle partnerships are expected to commence operations in 2017 with the first models planned for 2018 and 2019. In 2017, the Group is focusing its efforts in mobility solutions on the gradual build-up and expansion of a portfolio of mobility-on-demand services at MOIA.

“The coming years will be characterized by the profound change that we initiated with ‘TOGETHER’. Volkswagen will become faster, more focused, and more customer driven. This will allow us to make much more focused use of the strengths of our multibrand group and its synergy potential than in the past. We will develop new and fascinating mobility solutions. We will launch new vehicles on the market that will become the standard setters for the future. We will establish new business models, tap into new markets, and gradually take on a top position in the automotive world of tomorrow,” says Müller.

At the same time, he reaffirmed the financial targets associated with ‘TOGETHER – Strategy 2025’. The operating return on sales is expected to increase to seven to eight percent and the return on investment in the automobile sector to more than 15 percent. “We have set ambitious yet realistic targets. Targets that the entire Group feels committed to. We will deliver!” promised Müller.

The Volkswagen Group was able to set a new record for deliveries in fiscal year 2016 – despite all of the challenges from the diesel issue. “We were able to exceed our forecast by delivering 10.3 million vehicles to customers in 2016,” said CFO Frank Witter. The delivery figure also includes vehicles sold by the Chinese joint ventures. In 2016, Volkswagen sold 4.0 million units in China (incl. Hong Kong), 12.2 percent more than in the previous year.

The sales revenue of the Volkswagen Group also improved. “With EUR 217.3 billion, it exceeded the expected figure – one we had revised during the year – by around EUR 4 billion,” explained Frank Witter. At EUR 14.6 billion, the operating result before special items also exceeded the previous year’s figure significantly, due particularly to optimized product costs and improvements in the mix. “We were consequently able to improve our operating return before special items to 6.7 percent,” continued the CFO.

Special items totaling EUR 7.5 billion affected the operating result in fiscal year 2016, after a total of EUR 16.9 billion in the previous year. The special items relating to the diesel issue amounted to EUR 6.4 billion in 2016, mainly due to expenses for legal risks.

In the previous year, expenses related to the diesel crisis amounted to EUR 16.2 billion. Witter: Through agreements reached in North America, we have taken a huge step toward overcoming the diesel issue.

At EUR 0.2 billion, the financial result for 2016 declined by EUR 2.6 billion compared to the previous year. This was mainly due to the income from the sale of Suzuki shares that yielded a distinctly positive effect in 2015. The decline can also be attributed to lower income from the equity-accounted Chinese joint ventures that were negatively impacted by exchange rate effects. The Volkswagen Group's earnings before tax (EUR 7.3 billion) and earnings after tax (EUR 5.4 billion) were once again positive in fiscal year 2016.

With EUR 7.1 billion, the Volkswagen Group's operating result turned positive again as well in 2016, despite special items. The operating return increased from –1.9 to 3.3 percent.

A profit share of EUR 5.1 billion was earned for shareholders of Volkswagen AG (EUR –1.6 billion). Against the backdrop of this development, the Board of Management and Supervisory Board will propose a dividend of EUR 2.00 per ordinary share and EUR 2.06 per

preferred share to the Annual General Meeting. This corresponds to a distribution ratio of 19.7 percent.

At EUR 12.8 billion (EUR 12.7 billion), investments in property, plant and equipment in the Automobile Division remained at the previous year's level. The ratio of investments in property, plant and equipment (capex) to sales revenue remained unchanged at 6.9 percent. Investments were primarily directed at production plants and at new models. Other investment priorities were the ecological focus of the model range, growing electrification and the modular toolkits.

Sales revenue at the Volkswagen Passenger Cars brand declined by 0.6 percent year-on-year to EUR 105.7 billion. Operating profit before special items fell to EUR 1.9 (2.1) billion. The decline was mainly attributable to volume-, product mix- and currency-related effects and higher marketing costs as a result of the diesel issue. By contrast, cost savings from the efficiency program had already a positive impact. The operating return on sales before special items also declined slightly from 2.0 to 1.8 percent.

At EUR 59.3 billion, the Audi brand’s sales revenue exceeded the prior-year figure by EUR 0.9 billion. The operating result before special items was EUR 4.8 (5.1) billion. Optimization of costs had a positive impact, the “SPEED UP!” action program launched in fiscal year 2016 also began to bear fruit. The brand generated an operating return on sales before special items of 8.2 (8.8) percent. The diesel issue resulted in negative special items of EUR –1.8 billion. The financial key performance indicators for the Lamborghini and Ducati brands are included in the financial figures for the Audi brand.

The ŠKODA brand’s sales revenues increased by 9.8 percent in the reporting period to EUR 13.7 billion. Positive volume- and product mix-related effects and the optimization of product costs increased operating profit by 30.9 percent to EUR 1.2 billion. The operating return on sales rose from the previous year’s 7.3 percent to 8.7 percent.

SEAT achieved a record sales revenue and operating profit in 2016: At EUR 8.9 billion, sales revenue exceeded the prior-year figure by 3.8 percent. SEAT returned to profit in 2016 with an operating result of EUR 153 (–10) million. Cost reductions and improvements in the product mix, particularly as a result of the success of the new Ateca, more than compensated for negative exchange rate effects. The SEAT brand’s operating return on sales was 1.7 (–0.1) percent.

Bentley generated sales revenue of EUR 2.0 billion in 2016, exceeding the equivalent prior-year figure by 4.9 percent. Despite a change in market conditions and the cost of launching the Bentayga, positive exchange rate effects and cost reductions meant that the operating

Porsche recorded new records once again in fiscal year 2016. At EUR 22.3 (21.5) billion, sales revenue exceeded the prior-year figure by 3.6 percent. Operating profit rose by 13.9 percent to EUR 3.9 billion, due to volume-, product mix- and currency-related effects and a comparatively low cost growth despite expenses for electrification, digitalization and new business fields. The operating return on sales improved to 17.4 (15.8) percent.

At EUR 11.1 (10.3) billion, sales revenue for the Volkswagen Commercial Vehicles brand in fiscal year 2016 exceeded the prior-year figure. The operating result improved by 19 percent to EUR 455 million. Volume- and product mix-related effects and product cost optimization had a positive impact. The operating return on sales rose from the previous year’s 3.7 percent to 4.1 percent.

At EUR 11.3 (10.5) billion, sales revenue for the Scania brand in fiscal year 2016 exceeded the prior-year figure by EUR 0.8 billion. Operating profit before special items rose to EUR 1.1 (1.0) billion. Negative exchange rate effects were more than offset by higher vehicle sales and an expansion of the service business. The operating return on sales before special items stood at 9.5 (9.8) percent in the reporting period. Legal risks in connection with the commercial vehicle antitrust proceedings launched by the European Commission gave rise to special items of EUR –0.4 billion.

With revenue totaling EUR 27.6 billion (6.4 percent increase), Volkswagen financial services posted a record result in 2016. At EUR 2.1 billion, operating profit exceeded the prior-year figure by 9.6 percent. This Division thus made a substantial contribution to the Group’s performance, as it has done in previous years.

The Group believes that deliveries in 2017 will moderately exceed the prior-year volume amid persistently challenging market conditions. Challenges will arise particularly from the economic situation, intense competition in the market, volatile exchange rates and the diesel issue. The sales revenues of the Volkswagen Group is expected to grow by up to 4 percent year-on-year in 2017. In terms of the Group’s operating result, Volkswagen anticipates an operating return on sales of between 6.0 and 7.0 percent.

• Press text and images are available for downloading at www.volkswagen-media-services.com

• Facts, figures and information on the Volkswagen Group is available from the ‘Navigator’ at http://navigator.volkswagenag.com (also available in a tablet, PC and smartphone version)

• Further information regarding the TOGETHER – Strategy 2025 future program can be found at http://together.volkswagenag.com/