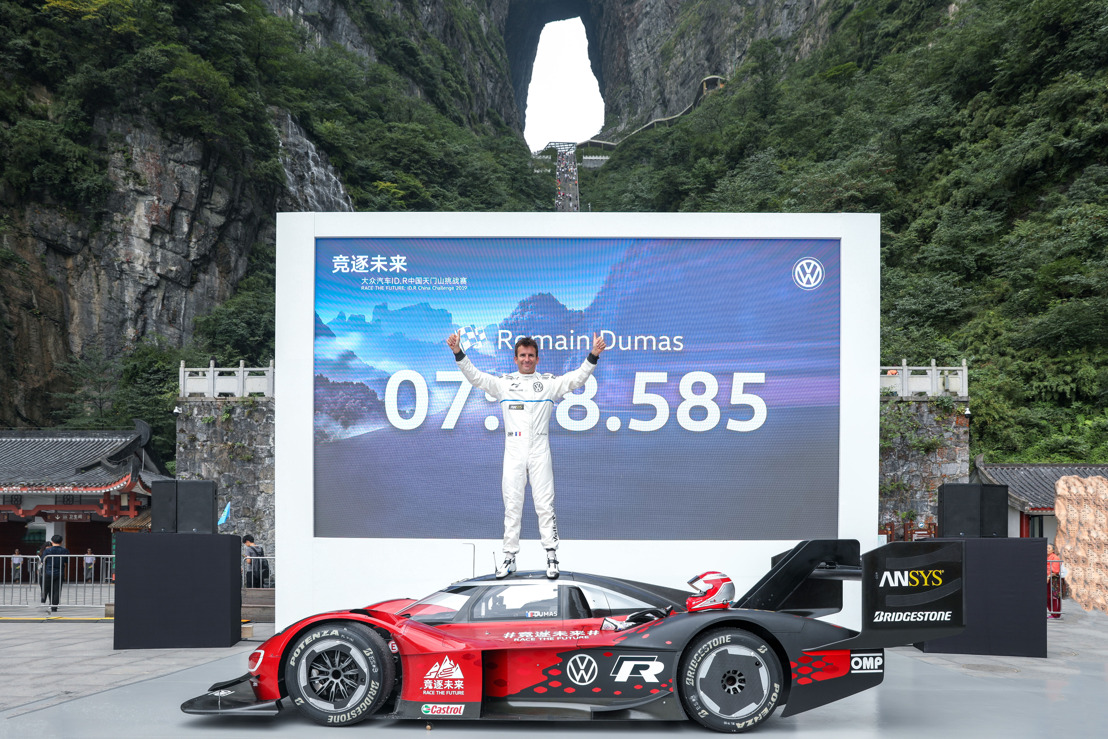 An extraordinary drive on the limit, with spectacular images and the first record on Tianmen Mountain: Volkswagen has achieved a major milestone with the ID.R in China – one that literally helps drive electromobility to new highs. Romain Dumas (F) completed the 99 tight corners on the Tianmen Mountain road in 7:38.585 minutes – faster than ever before. The ID.R currently holds the records on Pikes Peak (USA) and at the Goodwood Festival of Speed (GB), the electric lap record on the Nürburgring-Nordschleife (D), and now the fastest time for an ascent of Tianmen Mountain in China. The car is the motorsport ambassador for the new, fully-electric range of vehicles from Volkswagen, the ID. family, the first of which – the ID.3 – will have its world premiere on 10 September at the Frankfurt Motor Show.

“A new record on a truly spectacular road – Volkswagen and the ID.R have once again shown what the electromobility of the future is already capable of today,” said Ralf Brandstätter, Chief Operating Officer of the Volkswagen Passenger Cars brand. “Not only has it proven that electric cars like the ID.R can break established records and set new benchmarks, but the ID.R also shows how emotive and exciting the mobility of the future is.”

Demanding record run for man and machine
“Tianmen Shan Big Gate Road” on Tianmen Mountain is a true test. Romain Dumas approached the 10.906-kilometre “China Challenge” to “Heaven’s Gate” – a 131.5-metre natural arch – with respect and courage. 99 hairpins, some with a radius of just six metres, followed by short sprints, fast winding sections with speeds of up to 230 km/h, and hard braking manoeuvres in extremely narrow tunnels – Dumas brilliantly overcame these extreme challenges for any driver, setting a new official record in the process. The ID.R is driven by two electric motors with a total system performance of 500 kW (680 PS), riding on tailor-made Bridgestone Potenza tyres. A start and finish line were defined for notarial purposes, especially for the record attempt with the ID.R.

Further quotes on the record-breaking run on Tianmen Mountain

Romain Dumas (F), Volkswagen ID.R
“I will certainly remember this record run on Tianmen Mountain for ever as my most spectacular outing. I am proud to have set a record with the electric Volkswagen ID.R in China. The little information and testing we had beforehand made it a huge challenge. The road is incredibly narrow and winding, but the drive was unbelievable fun with the electric power of the ID.R. The huge torque was a big advantage on the short straights, while the aerodynamics provided additional traction in the fast sections.”

Dr. Stephan Wöllenstein, Member of the Board of Management of the Volkswagen Passenger Cars Brand and CEO of Volkswagen Brand China
“With the record set on the dramatic Tianmen road, we have mastered another challenge in our fully-electric ID.R race car. Seeing the ID.R race at this impressive Chinese monument of nature, has been truly spectacular. The ID.R underlines Volkswagen’s capabilities in terms of e-mobility and gives customers an exciting outlook for our fully-electric future.”

Sven Smeets, Volkswagen Motorsport Director
“This record attempt was a special challenge for the whole team. We have really broken new ground on our motorsport expedition to Tianmen Mountain. This was extremely unusual territory for a sports car like the ID.R and we had to take a whole new direction once again during preparation and car setup. The entire team – from the engineers, mechanics and logistics experts to our driver Romain Dumas himself - adapted in no time at all. I am proud of what the team has achieved. This record will take a special place in the history of Volkswagen in motorsport.”

Volkswagen on Tianmen Mountain – a unique record attempt with the ID.R electric racing car
The Chinese mountain Tianmen, about 1,300 kilometres as the crow flies from the capital Beijing, is host to one of the most spectacular roads in the world: the Tianmen Shan Big Gate Road close to the city of Zhangjiajie. With 99 hairpin corners, it climbs about 1,100 metres in elevation difference. On 2 September 2019, Romain Dumas (F) set a benchmark with the Volkswagen ID.R on the 10.906-kilometre route. An official fastest time for racing cars did not exist before the record attempt. The ID.R, the racing ambassador of the future ID. product family, is powered by two electric motors with a system performance of 500 kW (680 PS). The record attempt on the spectacular mountain road to the mythical ‘Heaven’s Gate’ supports Volkswagen’s electric model offensive in China.