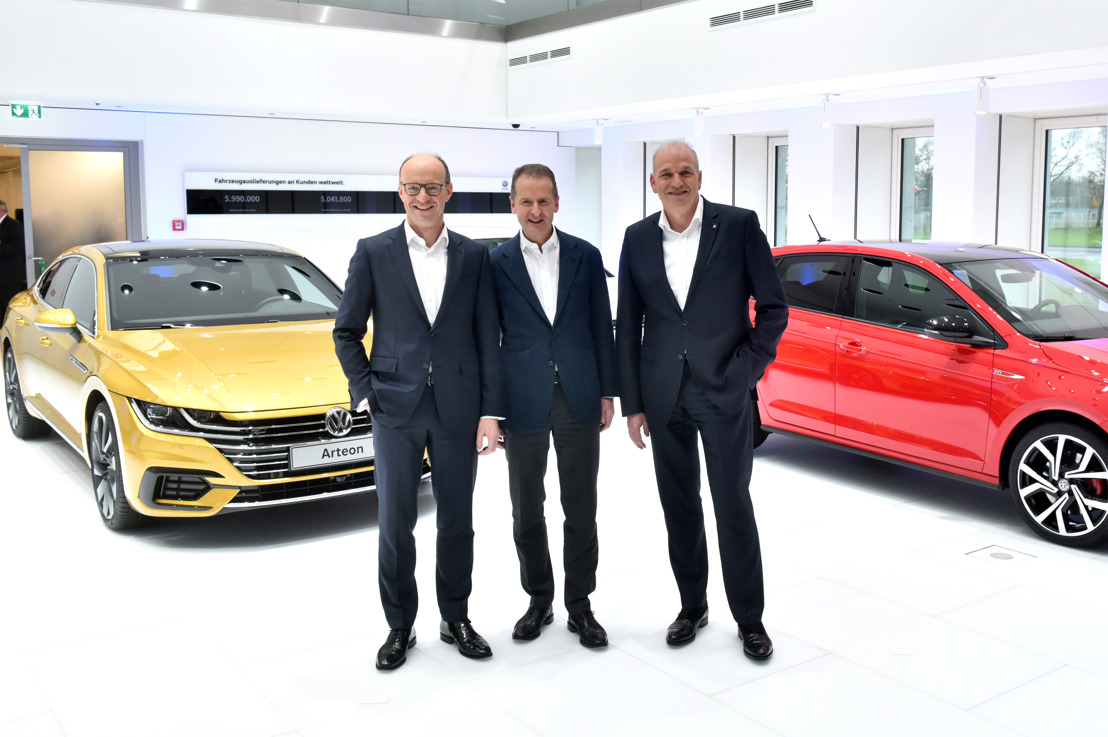 Wolfsburg – The Volkswagen brand is moving ahead with the transformation initiated under its TRANSFORM 2025+ strategy a year ago. Implementation is running at full speed and the core brand of the Volkswagen Group has made progress in all the key action areas over the past 12 months.

“We have initiated the fundamental realignment of the brand with our strategy. This is the milestone plan which Volkswagen will use to steer through the extremely demanding phase in our industry which is ahead of us. Our goal is to make Volkswagen the world’s leading volume manufacturer and to ensure that we make optimum preparations for the future of the automobile,” said Dr. Herbert Diess, CEO of the Volkswagen brand.

Thanks to the successful SUV offensive among other factors, the brand is back on track for growth and is heading for a sales record in 2017. In line with its goals, the brand is increasingly regaining the lead in the volume segment. At the same time, Volkswagen is consistently forging ahead with the expansion of e-mobility and the sustained transformation of its powertrain portfolio.

The fact that the realignment is taking effect is also confirmed by the profitability of the brand. For 2017 as a whole, Volkswagen expects an operating return on sales slightly above the original target corridor of 2.5 to 3.5 percent. This year, the brand is therefore already approaching the target of about 4.0 percent set for 2020. On this basis, the Volkswagen brand has defined a target corridor for 2020 of an operating return on sales between 4.0 percent and 5.0 percent.
Implementation of TRANSFORM 2025+ successfully started In November 2016, Volkswagen had initiated the fundamental strategic realignment of its core brand with the TRANSFORM 2025+ strategy. In the first phase, up to 2020, core business is to be strengthened and the brand is to be positioned as a leading, profitable volume manufacturer before taking the lead in e-mobility. In this first phase, the brand is pursuing five key action areas.

SUV offensive taking effect In the course of the model offensive, Volkswagen has been able to significantly increase the number of vehicles delivered in the course of the year. In October, Volkswagen set a new record for monthly deliveries, with a total of 550,900 vehicles handed over to customers throughout the world. After 10 months, deliveries have reached a cumulative figure of 5.04 million vehicles, which is more than 3 percent above the prior-year period – and sales have recently gained momentum. For the year as a whole, the brand expects to set a new sales record.
This year, Volkswagen will have launched 10 new models, including five entirely new models without predecessors. The main focus of the model offensive is on the SUV segment, with new models including the Tiguan Allspace, Atlas and T-Roc. By 2020, Volkswagen intends to expand its global SUV range to 20 models. By then, about 40 percent of the Volkswagens sold are to be SUVs.

Brand positioning strengthened With its model offensive, the brand is pursuing the goal of positioning itself as the most attractive volume brand in all major regions of the world by 2020. In order to achieve this objective, Volkswagen has strengthened the organization of the major regions and given them greater responsibility in the course of its regionalization strategy; this also applies to the product portfolio. The new Volkswagen models are tailored to meet the wishes of customers in the regions even more closely. The regions throughout the world are linked by the brand’s claim to a leading position for quality and technology in the volume segment.

“Volkswagen is back on the offensive in all its core markets. We have achieved a turnaround with attractive models and are winning market shares,” said Jürgen Stackmann, Board Member of the brand responsible for Sales. “And we have only just started with our model offensive. Our product pipeline for the next few years is jam-packed – with many more strong vehicles precisely tailored to specific preferences in the various regions.“

Turnaround initiated in regions On the key US market, Volkswagen is pursuing the goal of becoming a relevant volume brand. In North America alone, four new SUVs are planned by 2020. In South America, Volkswagen has renewed its model range and aims to regain market leadership, e.g. with the Virtus model which was recently presented. In China, the brand intends to safeguard its position as a market leader with more than 10 new SUVs up to 2020 and to assume a  leading position in the key global market for e-mobility. For this purpose, Volkswagen will be launching more than 10 new electric models in China by 2020.

The first positive impact of the realignment in the regions is already evident in the sales figures. For example, deliveries to customers in China rose by about 4 percent in January to October compared with the corresponding prior-year period. In the USA, the rise was almost 10 percent and in Brazil more than 20 percent. In Russia, the brand already reached the financial break-even point, with growth of 17 percent in deliveries – significantly earlier than planned.
Improved competitiveness Despite its worldwide model offensive and the associated expansion of the product range, Volkswagen has succeeded in keeping overall fixed costs stable.

The pact for the future agreed a year ago is contributing to improved competitiveness. The pact provides for savings and efficiency improvements in all areas and at all locations with a positive impact on the result of €3.7 billion per year by 2020, including €3.0 billion in Germany. Since the pact was launched a year ago, improvements totaling €1.9 billion have already been achieved. Other specific measures are currently being implemented.

The pact for the future also provides for the socially compatible loss of 23,000 jobs by 2020 in Germany – at the same time as the creation of 9,000 jobs in future-oriented areas. Here too, Volkswagen is making progress. In 2017, 3,800 jobs have been cut to date. 2,000 of these job losses have compensated for by expected recruitment of apprentices upon the completion of their training and approved structural changes. In total, about 1,800 jobs have therefore been lost in 2017. The total target of 9,200 partial early retirement contracts signed, which are to take effect step-by-step up to 2020, will probably be reached by the end of the year.

Board Member for Finance Arno Antlitz said: “With our TRANSFORM 2025+ strategy and the pact for the future as a key element, we have already strengthened the earnings power of the Volkswagen brand over the past 12 months. We will pursue this path consistently with a view to expanding and sustainably safeguarding our return, even though the cost of meeting

more stringent CO2 targets and expenditure for future-oriented investments will grow considerably over the next few years.“

In Europe, a CO2 target of 95 grams per kilometer has been set for 2020. After 2020, the requirements will become even more stringent. The EU plans a voluntary electric car quota of 15% for 2025 and there will be new, demanding targets for fleet emissions. This means that e-mobility will become the key factor in meeting statutory requirements and mastering the associated financial challenges. It will be crucial to create a financial basis for shouldering the tasks ahead of us – and shaping e-mobility in a profitable way.

Development of new skills In order to safeguard its future viability, Volkswagen is developing new skills – especially in the fields of digitalization and e-mobility. All in all, 9,000 new jobs in future-oriented areas are to be created over the next few years. In addition, comprehensive training programs have started to prepare the workforce for the upcoming challenges.
Volkswagen is also expanding the direct contact with customers which is necessary for a continuous digital customer experience. The Future Sales Model defines cooperation with dealers throughout the world and lays the organizational foundation for the mobility services of the future.

Only a few days ago, Volkswagen reached a milestone in the digitalization of the brand in Germany: the new customer portal “Volkswagen We" is available with immediate effect. Among other functions, this allows customers to book servicing appointments directly using a smart phone for the first time. The platform gives Volkswagen the possibility of maintaining continuous direct contact with customers and offering them personalized content and convenient services.
Outlook: acceleration of realignment Up to 2020, Volkswagen will be launching more than 10 new models per year, including many SUVs. At the same time, the brand will continue to step up its efforts to make determined progress with the key future topics of the automotive world. This applies not only to e-mobility but also to digitalization and autonomous driving.

In order to accelerate the strategic realignment, Volkswagen recently adapted its investment plans to the TRANSFORM 2025+ strategy. Over the next five years, the brand will be investing about €4 billion in the new MEB electric architecture at its plants around the world. An additional amount of about €2 billion is to be invested in development. The Zwickau plant is to be developed into the largest European e-mobility center. Initially, the series production of all vehicles based on the new modular electric drive kit (MEB) will be concentrated at the plant. The first vehicle in the new generation of electric cars is to be the I.D.*, which will be launched in 2020.

The foundations for these developments will already be laid in 2018. The technical architecture of the MEB is to be finalized and preparations are to be made for production. Preparations are also to start for the production of the I.D. and market introduction will be planned. Next year, contracts for the supply of key components for the I.D. Crozz* will also be awarded, with series production due to start in 2020.

“The Volkswagen brand has started with the successful implementation of its TRANSFORM 2025+ strategy – the strategic realignment is delivering and we have taken the first step. But this is only the beginning. We have completed the first five kilometers of a marathon. And are all aware of the challenges that lie ahead of us. This is why we will accelerate the realignment of Volkswagen, continue our worldwide model and electric offensive and work hard on our costs,” said brand CEO Diess.

*The concept vehicles have not gone on sale, and therefore Directive 1999/94 EC does not apply.