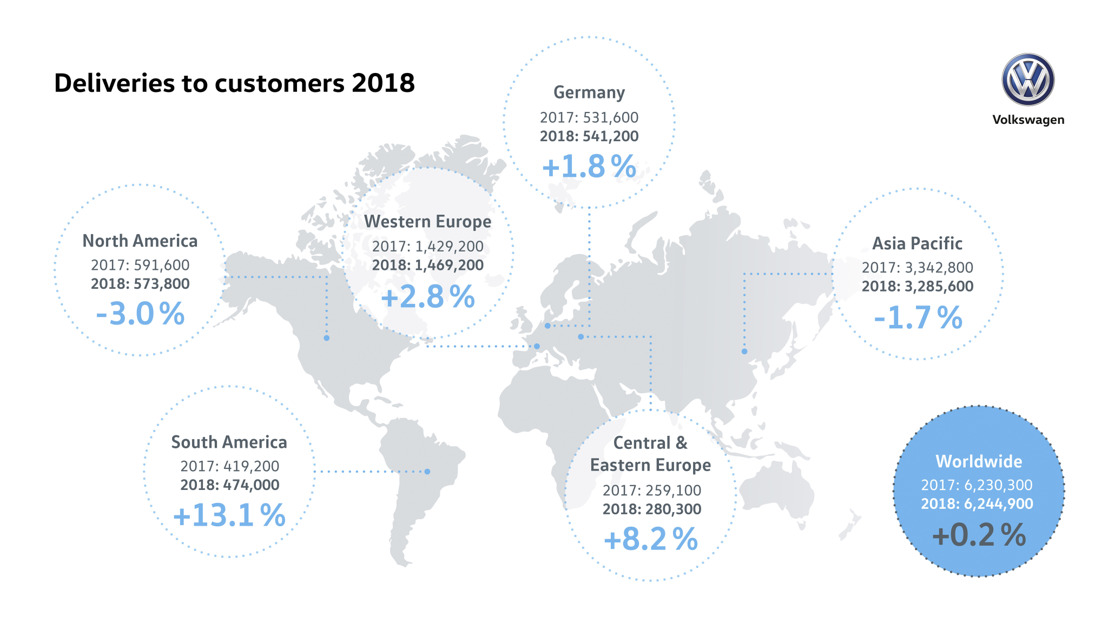 Volkswagen’s global SUV offensive is bearing fruit. Customers are giving a very warm welcome to the numerous new models. While global passenger car deliveries by the brand in 2018 were 0.2 percent higher than in 2017, the SUV segment grew 38.0 percent over the same period. As a result, almost every fifth Volkswagen delivered to customers was an SUV (19.2 percent). This share was only 13.9 percent in 2017.

By 2025, Volkswagen will have over 30 SUV models with conventional and electric drives in its global portfolio. The SUV offensive is to make a vital contribution to strengthening core business, enabling the brand to initiate the necessary multi-billion investments in e-mobility and autonomous driving.

The popularity of Volkswagen’s electric vehicles is also increasing. In total, the brand delivered some 50,000 pure electric cars and plug-in hybrids to customers last year, a rise of 13 percent compared with the previous year. The e-Golf1 was particularly popular: there was a 45 percent increase in deliveries, making the model one of the leading electric vehicles in Germany and Europe.

Deliveries in the regions and markets in 2018 developed as follows:

•             In Europe, the Volkswagen brand reported 3.6 percent growth in 2018, delivering 1.75 million vehicles despite the challenges presented by the changeover to the WLTP test procedure for the fleet, which significantly impacted deliveries from September. At the same time, the brand was able to grow its market share in the region. Strong demand for the new Tiguan Allspace and T-Roc models as well as the new versions of the Arteon and Polo played an important role in this context, attracting customers into the showrooms. In Western Europe, Volkswagen delivered 1.47 million vehicles, 2.8 percent more than in 2017. Deliveries were up in important markets such as Italy, Spain or France.

•             In the home market of Germany, the picture was similar. Volkswagen delivered 541,200 vehicles to customers here last year, exceeding the prior year figure by 1.8 percent.

•             In Central and Eastern Europe, Volkswagen reported appreciable delivery growth of 8.2 percent in 2018, handing over 280,300 vehicles here. Russia was the growth driver in the region, with vehicle deliveries there totaling 106,100 units, an increase of 18.5 percent. The brand’s bestsellers were the Polo notchback, the Tiguan and the Touareg.

•             In Turkey, Volkswagen had to contend with extremely difficult economic conditions last year, further aggravated by the sharp deterioration in the value of the Turkish lira in the second half of the year. Volkswagen delivered 50,000 vehicles to customers, 44.7 percent down on the previous year – in an overall market which felt the effects of this situation.

•             In North America, market developments were mixed. In the USA, Volkswagen delivered 354,100 vehicles in 2018, a rise of 4.2 percent – thanks to the continued success of its SUV models. In Canada, Volkswagen handed over 72,000 vehicles to customers – up 3.7 percent on 2017 and the brand’s all-time best delivery performance in this market. Business in Mexico, on the other hand, proved difficult. In a persistently critical economic environment, Volkswagen’s deliveries were 19.1 percent down on the previous year. Deliveries for the region as a whole thus fell by 3.0 percent compared with the previous year.

•             In South America, Volkswagen remained on track for growth at the end of the year. 474,000 vehicles were handed over to customers here in 2018 – a rise of 13.1 percent compared with the previous year. Momentum was strongest in Brazil, where Volkswagen delivered 335,800 vehicles, an increase of 28.6 percent. The eight new models launched in Brazil since the end of 2017 thrilled customers, with delivery figures reflecting this. The brand significantly outperformed the overall market in 2018. In Argentina, the difficult economic conditions continued to put a brake on the overall market. Consequently, Volkswagen’s deliveries were 22.4 percent down on the previous year, although the brand asserted its market leadership for the 15th consecutive year.

•             In the Asia-Pacific region, Volkswagen delivered 3.29 million vehicles in 2018, 1.7 percent down on 2017. This decrease is mainly attributable to developments in China, where customers continued to show a reluctance to buy in an uncertain economic environment. In total, 3.11 million customers took delivery of their Volkswagen in China in 2018 – a drop of 2.1 percent compared with the previous year. The brand nevertheless grew its market share further in an overall market where sales declined for the first time in more than ten years. Volkswagen remained the most popular automotive brand in China. Last year alone, Volkswagen launched nine new models including the new T-Roc, Tharu and Tayron SUVs. By doubling its model range in this segment, Volkswagen is establishing itself as an SUV brand in China. In addition, Volkswagen’s classic sedans continued to prove very popular with car buyers.

Overview of deliveries by the Volkswagen brand in 2018: