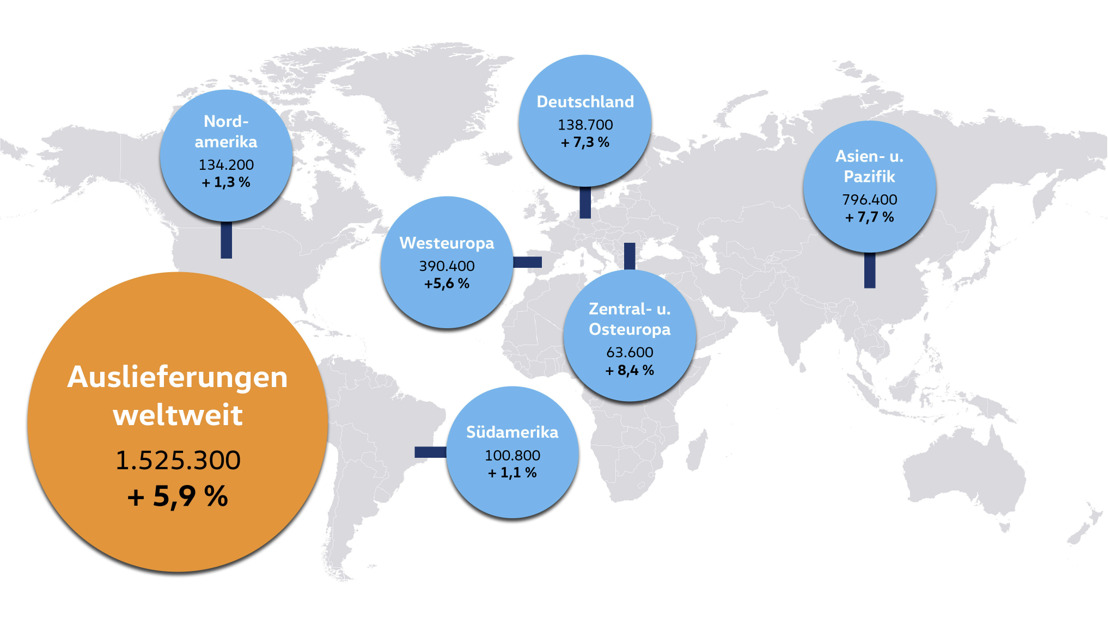 With more than 1.5 million vehicles delivered to customers in the first quarter of 2018, the Volkswagen brand recorded the best first-quarter delivery results in its history. Worldwide deliveries in March 2018 totaled 584,700, another new record and an increase of 4.9 percent compared with the prior-year figure for the same month. Jürgen Stackmann, Volkswagen Brand Board Member for Sales, said: “The Volkswagen brand’s first-quarter delivery results are very encouraging. Thank you to our customers and dealers! We achieved growth in many European markets as well as Germany. The upward trend continued in North and South America. In South America, the successful launch of the Polo and Virtus had a significant impact on the encouraging results, in North America the successful launch of the Tiguan Allspace and the Atlas. In Brazil, we recorded our best quarterly results since 2015 and won further market share.”

Deliveries in the regions and markets in March developed as follows:

190,000 vehicles were handed over to customers in Europe in March, an increase of 3.4 percent compared with the previous year. This trend was mostly driven by the large markets in Western Europe: Italy (+9.9 percent) and France (+8.6 percent) as well as Sweden (+11.9 percent) showed particularly positive development, while Western Europe as a whole was able to secure a 1.9 percent increase on the prior year.

Deliveries in the home market of Germany were approximately the same as the prior year. 54,400 vehicles were handed over to customers, 0.8 percent down on the previous year.

25,300 vehicles were handed over to customers in the Central and Eastern Europe region, corresponding to a 14.6 percent increase on the previous year. In Russia, the number of deliveries stood at 8,600 vehicles, an encouraging 24.1 percent higher than the prior-year figure.

50,500 vehicles were delivered in North America, corresponding to a 5.2 percent increase compared with the previous year. The Volkswagen brand’s SUV offensive helped bring about a 17.8 percent increase in the USA, with deliveries amounting to 32,500 vehicles. Deliveries of the new Tiguan in March totaled 9,700 units. The positive trend in Canada also continued (+31.8 percent).

The brand continued on its growth course in China in March. Volkswagen delivered 269,500 vehicles in its largest individual market – a further rise of 6.0 percent. There was particularly high demand for the Jetta, Lavida and Santana models. The highest absolute growth was attributable to the Teramont.