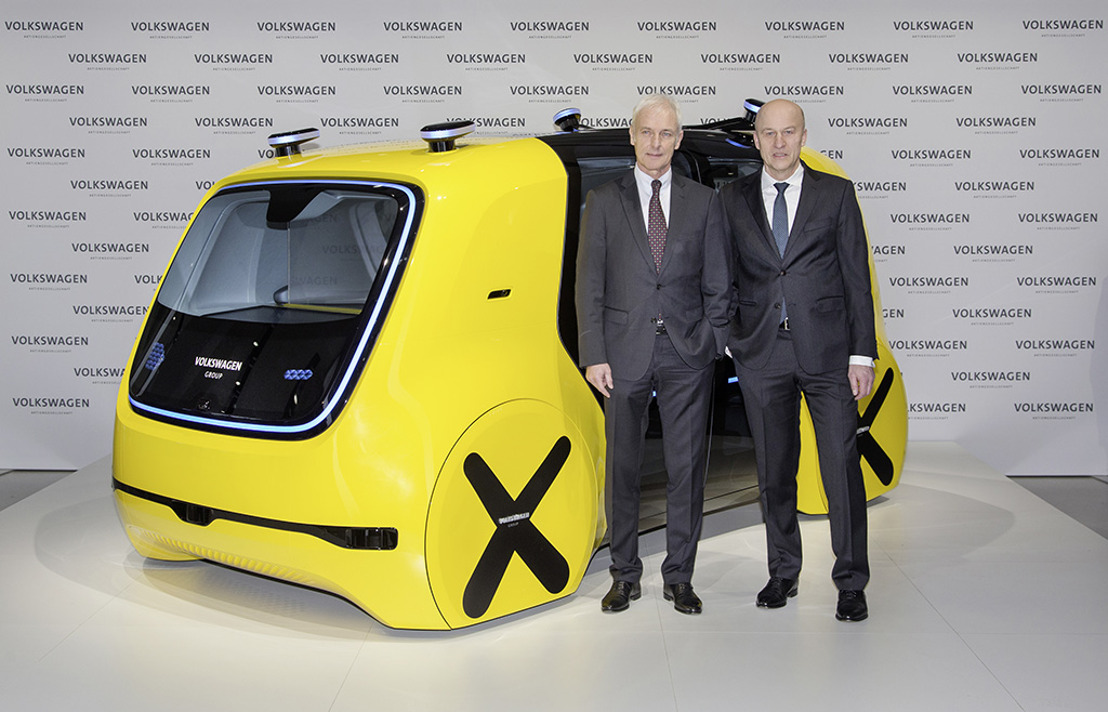 The Volkswagen Group is driving forward with the transformation to e-mobility. 16 locations around the globe are to produce battery powered vehicles by the end of 2022. This was announced by Matthias Müller, CEO of Volkswagen AG, at the Group's Annual Media Conference in Berlin. The Group currently produces electric vehicles at three locations, and in two years' time a further nine Group plants are scheduled to be equipped for this purpose. To ensure adequate battery capacity for the massive expansion of environmentally-friendly electric mobility, partnerships with battery manufacturers for Europe and China have already been agreed. The contracts already awarded have a total volume of around EUR 20 billion. A supplier decision for North America will be taken shortly.

"Over the last few months, we have pulled out all the stops to implement ‘Roadmap E' with the necessary speed and determination," CEO Müller explained in Berlin. When "Roadmap E" was launched last fall, Volkswagen announced plans to build up to three million electric vehicles annually by 2025 and market 80 new electric Group models. This year, another nine new vehicles, three of which will be purely electric-powered, will be added to the Group's electric portfolio of eight e-cars and plug-in hybrids.

A number of innovations from the Group were presented last week at the Geneva International Motor Show, among them the Audi e-tron, the Porsche Mission E and the I.D. VIZZION, another member of the Volkswagen I.D. family. From 2019, there will be a new electric vehicle "virtually every month", Müller said: "This is how we intend to offer the largest fleet of electric vehicles in the world, across all brands and regions, in just a few years."

The CEO made a point of emphasizing that this did not mean Volkswagen was turning its back on conventional drive systems. Modern diesel drives were part of the solution, not part of the problem, he stressed – also with regard to climate change. "We are making massive investments in the mobility of tomorrow, but without neglecting current technologies and vehicles that will continue to play an important role for decades to come," said Müller. "We are putting almost EUR 20 billion into our conventional vehicle and drive portfolio in 2018, with a total of more than EUR 90 billion scheduled over the next five years."

A separate Committee chaired by CEO Müller is advancing digitalization in the Group, a key issue for the future. "The future of mobility is gradually taking shape, as is the future of the Volkswagen Group," Müller said. The best example of this is SEDRIC, which has enabled the Volkswagen Group to demonstrate the potential of fully autonomous driving for the first time. SEDRIC was designed in the Group, but will soon be "leaving the Group for refinement into a series product at one of our brands," Müller announced.

The transformation of the entire Group that got off the ground in 2016 is becoming "more concrete, tangible and discernible with every passing day," said Müller. TOGETHER – Strategy 2025 brought precisely the shake-up that Volkswagen needed. "2017 was an excellent year for the Volkswagen Group and its brands. We're back on the offensive– and we intend to remain there," the CEO stressed, adding that this was true for electric mobility in particular. "With ‘Roadmap E', we have sent a powerful message of our resolve," Müller stated. The Volkswagen Group kicked off "Roadmap E", the most comprehensive electrification drive in the automotive industry, last year.

The realignment was already paying dividends throughout the Group. "We are financially robust and strategically well-positioned," Müller said. "Things are really moving. And we have plans for much more. A change of course for the Volkswagen supertanker – full speed ahead to the future!"

The Volkswagen Group has the financial resources for the transformation. In spite of the billions in cash outflows from the diesel crisis, net liquidity at the end of 2017 remained at a very solid EUR 22.4 billion. "The results of the year 2017 demonstrate, we are actively shaping the transformation of our company," said CFO Frank Witter. "And we will not cease in our efforts in 2018." The CFO underlined in Berlin, where the Annual Media Conference was taking place at the Group's DRIVE. Volkswagen Group Forum for the first time, that the result reflects strong operational performance in the Group.

Key performance indicators for 2017: strong earnings in spite of the diesel issue

The Volkswagen Group concluded the 2017 fiscal year successfully. Record figures were achieved for nearly all key performance indicators, most notably in the number of vehicles delivered: 10.7 million customers worldwide – more than ever before – opted for a model from one of the Group's brands last year. This includes vehicles sold by the Chinese joint ventures, which handed over 4.2 million vehicles to customers in the 2017 reporting period (including Hong Kong and imports), 5.1 percent more than in the previous year.

Group sales revenue also climbed to a new record level in 2017. "At EUR 230.7 billion, the Group's sales revenue was up 6.2 percent on the prior-year figure, which was a new record," CFO Frank Witter explained. Operating profit before and after special items was also better than ever, amounting to EUR 17.0 billion before special items and to EUR 13.8 billion after special items. "Even after deducting special items, this is the best operating profit that the Volkswagen Group has ever achieved," Witter said. The increase was primarily the result of positive volume-, mix- and margin-related factors as well as improved product costs. The operating return on sales before special items rose from 6.7 to 7.4 percent.

Overall, the operating profit was reduced by special items from the diesel issue of EUR –3.2 billion in 2017 compared with EUR –6.4 billion in the previous year. These expenses in the 2017 fiscal year were mainly attributable to higher expenses for the buy-back and retrofitting programs for 2.0 l and 3.0 l TDI vehicles in North America and to higher legal risks.

Unlike the figures for deliveries, the Group's sales revenue and operating profit do not contain the business with the Chinese joint ventures, since these are accounted for using the equity method. The joint ventures in the People's Republic generated a proportional operating profit of EUR 4.7 billion in fiscal year 2017, compared with just under EUR 5.0 billion in the previous year. In addition, a further joint venture was agreed with Chinese manufacturer Anhui Jianghuai Automobile (JAC) that will develop, produce and market electric vehicles. At a future date, the Group is also planning to export vehicles that will be manufactured in China – initially to the Philippines and later to other South East Asian markets.

The financial result decreased to EUR 0.1 billion in 2017 from EUR 0.2 billion in the previous year. Profit before tax rose to EUR 13.9 billion in the reporting period, exceeding the prior-year figure by EUR 6.6 billion. Profit after tax amounted to EUR 11.6 (5.4) billion. At 16.3 (26.2) percent, the tax rate was considerably lower in 2017. This was due to the US tax reform resolved at the end of the year, which led to a one-off positive, non-cash measurement effect of EUR 1.0 billion.

Earnings attributable to Volkswagen AG shareholders amounted to EUR 11.4 (5.1) billion. Witter: "The Board of Management and the Supervisory Board are pleased to be able to propose a dividend of EUR 3.90 per ordinary share and EUR 3.96 per preferred share to shareholders."

Research and development costs in 2017 were dominated by new models along with the electrification of the vehicle portfolio, a more efficient range of engines and digitalization. At EUR 12.6 (12.8) billion, investments in property, plant and equipment in the Automobile Division remained at the previous year's level. The R&D ratio, total research and development expenditure as a percentage of the Automotive Division's sales revenue, decreased to 6.7 (7.3) percent. Capex/sales revenue was also lowered significantly to 6.4 (6.9) percent. "We remain committed to our goal to reduce the ratio of both capex and R&D to 6 per cent by 2020 at the latest," underlined CFO Witter in Berlin.

Net cash flow in the Automotive Division declined by EUR 10.3 billion to EUR –6.0 billion as a consequence of the high cash outflows from the diesel issue. Excluding these disbursements, the net cash flow would have been around EUR 10 billion in spite of the high level of capital expenditure for the future, Witter pointed out. "Net cash flow is a reflection of our strong operating business and is impressive evidence of our financial strength," he said. At EUR 22.4 billion, net liquidity in the Automotive Division at the end of 2017 remained at a robust level.

Sales revenue for the Volkswagen Passenger Cars brand in 2017 was down 24.3 percent year-on-year at EUR 80.0 billion. This was due to the reclassification of companies. Operating profit before special items rose to EUR 3.3 (1.9) billion. The operating return on sales before special items increased to 4.1 (1.8) percent. The diesel issue gave rise to special items of EUR –2.8 (previous year's total: –5.2) billion.

At EUR 60.1 billion, sales revenue for the Audi brand in 2017 exceeded the prior-year figure by EUR 0.8 billion. At EUR 5.1 (4.8) billion, the operating profit before special items was up on the prior-year level. The operating return on sales before special items stood at 8.4 (8.2) percent. The diesel issue gave rise to special items of EUR –0.4 (previous year's total –1.8) billion. The financial key performance indicators for the Audi brand also include the Lamborghini and Ducati brands.

The ŠKODA brand's sales revenue increased by 20.8 percent year-on-year to EUR 16.6 billion in the 2017 fiscal year. Operating profit improved by 34.6 percent to EUR 1.6 billion; the increase resulted above all from the higher volume and mix effects. The operating return on sales rose from the previous year's 8.7 percent to 9.7 percent.

Bentley recorded sales revenue of EUR 1.8 billion in the past fiscal year, a decline of 9.2 percent year-on-year. Operating profit declined to EUR 55 (112) million. The operating return on sales stood at 3.0 (5.5) percent.

The 2017 fiscal year was once again very successful for Porsche: Porsche Automobile generated sales revenue of EUR 21.7 (20.7) billion, an increase of 4.7 percent. Operating profit improved by 7.2 percent to EUR 4.0 billion; the increase resulted primarily from the higher volume. The operating return on sales amounted to 18.5 (18.0) percent.

Sales revenue at the Scania brand was up EUR 1.5 billion year-on-year at EUR 12.8 (11.3) billion. Operating profit (previous year's figure excludes special items) improved to EUR 1.3 (1.1) billion. This was due to higher vehicle sales and an expansion of the service business. In the reporting period, the operating return on sales (previous year's figure excludes special items) amounted to 10.1 (9.5) percent.

Starting January 1, 2017, Porsche's financial services business is reported as part of Volkswagen Financial Services. In the past fiscal year, Volkswagen Financial Services generated sales revenue of EUR 31.8 billion, 15.5 percent more than in the previous year. At EUR 2.5 billion, operating profit exceeded the previous year's figure by 16.9 percent, hitting a new record. Along with the inclusion of additional revenue from Porsche Financial Services, the increase resulted primarily from improved margins and business growth.

For the year as a whole, the Group expects deliveries to customers of the Volkswagen Group in 2018 to moderately exceed the prior-year figure. Challenges in the current fiscal year will arise mainly from the economic situation, increasing competition, exchange rate volatility and the diesel issue. In the EU, there is also a new, more time-consuming test procedure for determining pollutant and CO2emissions as well as fuel consumption in passenger cars and light commercial vehicles (WLTP).

Sales revenue for the Volkswagen Group is expected to be up by as much as 5 percent on the prior-year figure. In terms of operating profit, an operating return on sales of between 6.5 and 7.5 percent is anticipated.