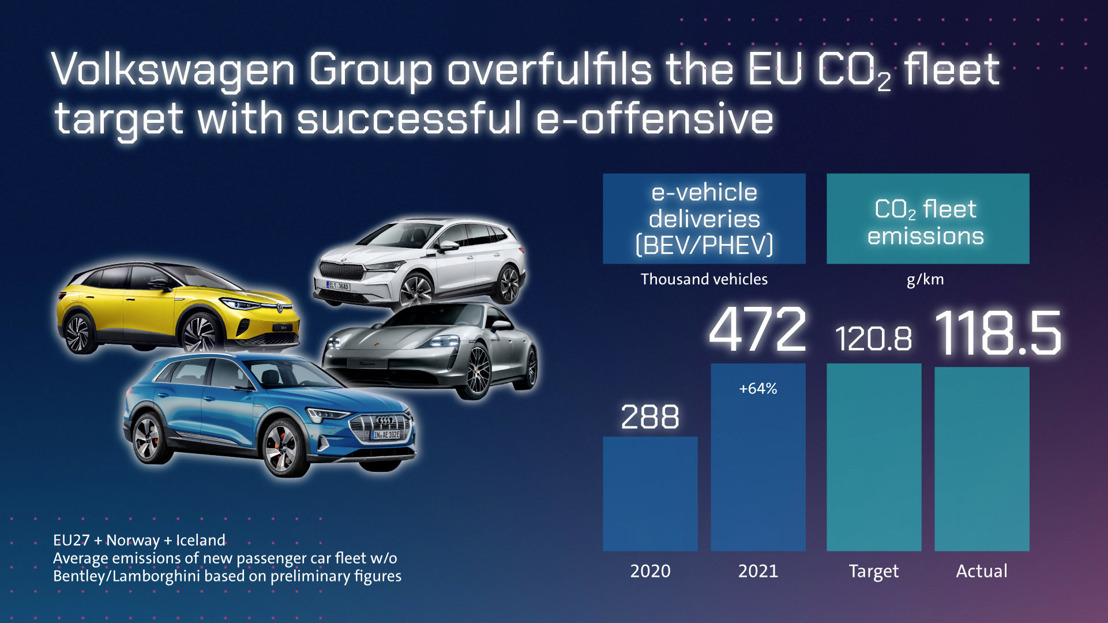 Volkswagen has made significant progress in decarbonizing its vehicle fleet on its path to becoming a sustainable, software-centric mobility group. In 2021, 472,300 electrified vehicles were delivered in the EU including Norway and Iceland, 64 percent more than in the previous year. The proportion of battery electric vehicles (BEVs) and plug-in hybrids (PHEVs) rose to 17.2 percent of total deliveries (2020: 10.1 percent). The Group is thus the clear market leader in the BEV segment in Europe, accounting for a market share of around 25 percent. Based on preliminary figures, the Group achieved average CO2 emissions of 118.5 g/km in 2021 for its new passenger car fleet in the EU, which is around 2 percent below the legal target. The final confirmation by the EU Commission is to follow at a later date. The emissions of Bentley and Lamborghini are measured individually, which is why they are not included in this figure.

Christian Dahlheim, Head of Group Sales: “Our Group-wide electric offensive picked up significant speed last year with many attractive new models. Nearly one in five vehicles delivered in Europe was electrified, and more than half of these were all-electric. This helped us to further reduce CO2 fleet emissions and fulfil the EU target. We were also able to inspire many new customers for e-mobility. As part of our NEW AUTO strategy, we will continue to consistently drive forward the electrification of our portfolio in the coming years. In 2030, we plan a share of all-electric vehicles of 60 percent in Europe.”

In 2020, the Volkswagen Group had achieved average CO2 emissions of 99.9 g/km for its fleet in the EU including the United Kingdom, Norway and Iceland – a figure that was calculated based on the New European Driving Cycle (NEDC). The legal basis since 2021 has been the Worldwide harmonized Light vehicles Test Procedure (WLTP). The underlying test cycle in this procedure is more realistic than in the NEDC, with a higher top speed being driven, for example. This generally gives higher CO2 emissions, which is why the CO2 fleet targets have also been switched over to the WLTP. The fleet values achieved for 2020 and 2021 are not comparable for this reason; moreover, the United Kingdom is no longer included in 2021 due to its exit from the EU.

This year, the Volkswagen Group will offer additional new all-electric vehicles to its customers as part of its electric offensive. Based on the Modular Electric Drive Toolkit (MEB), the Volkswagen brand is planning to launch the dynamic SUV coupés ID.501 and ID.5 GTX02, which it has already unveiled, as well as the iconic ID. BUZZ03. Also based on the MEB, ŠKODA will roll out the sporty Enyaq iV Coupé03 and CUPRA expands the range of the Born04 with additional battery capacities and a more powerful e-Boost version. Audi will introduce the upgraded e-tron and new versions of the Porsche Taycan and Taycan Sport Turismo will be available for the first time.

The Group aims to become the leading provider of electric vehicles worldwide by 2025. In the period from 2022 to 2026, around €52 billion of investments are therefore planned in e-mobility and another amount of around €8 billion in the hybridization of the model portfolio.

Volkswagen is the first automotive group to commit to the Paris Climate Agreement and intends to become net climate neutral by 2050, which is why the Group is systematically driving forward decarbonization even beyond its vehicles. The power plant in Wolfsburg, which produces electricity for the plant and district heating for the city, was recently converted from coal to gas. That will save 1.5 million tons of CO2 per year, equivalent to the annual emissions of 870,000 cars.

MAN Energy Solutions is even going one step further. This company is already working on innovative technology to replace district heating from fossil-fuel power plants. A heat pump plant with sector coupling is being piloted in Esbjerg. With a total heating capacity of 50 MW, the plant will supply around 100,000 residents with approximately 235,000 MWh of heat annually. This will save 100,000 tons of CO2 per year – equivalent to the CO2 emissions of 55,000 cars.