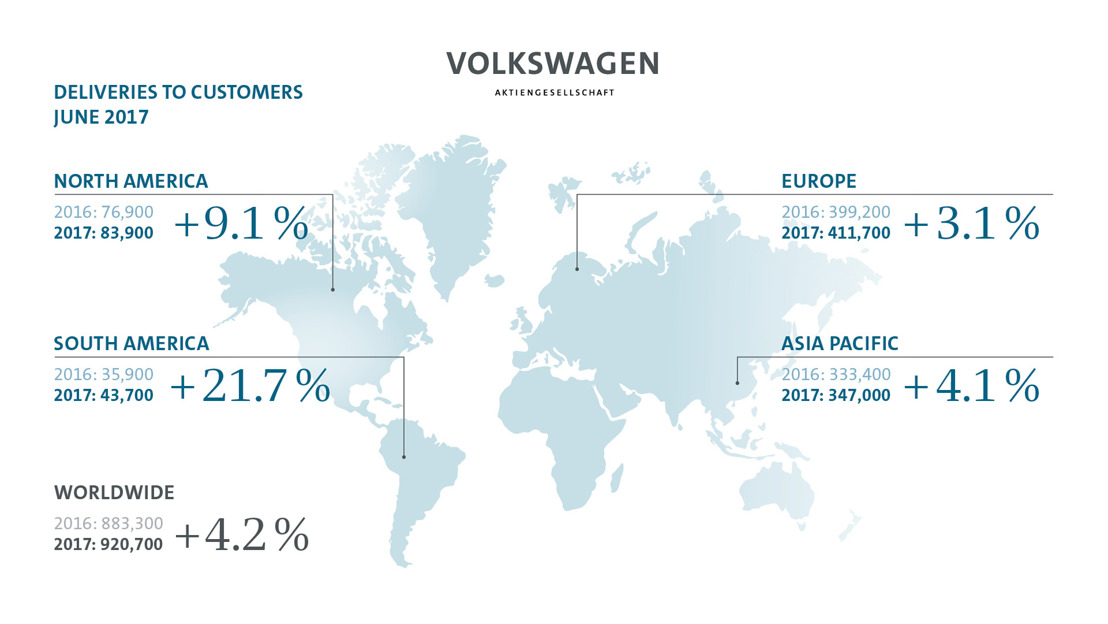 Wolfsburg, July 19, 2017 – Up to the end of June, the Volkswagen Group handed almost 5.2 million vehicles over to its customers. This corresponds to a rise of 0.8 percent compared with the previous year. In the month of June, new vehicle
deliveries rose by 4.2 percent to 920,700. “June was a very strong month for the Group and all brands improved deliveries compared with the previous year,” said Fred Kappler, Head of Group Sales of Volkswagen Aktiengesellschaft. “Stable growth in core regions gives us reason to look forward with confidence to the second half of the year,” Kappler added.

In Europe, deliveries by the Group continued to grow. In June, 411,700 (+3.1 percent) vehicles were handed over to customers. Growth of 3.5 percent in deliveries was recorded in the first half of the year. Strong impetus for growth continues to come especially from Central and Eastern Europe, where deliveries in June were 13.2 percent higher than in the previous year, at 67,000 new vehicles. This growth was driven by Russia (+14.8 percent), the Czech Republic and
Poland. While deliveries in the West European core markets also rose (+1.4 percent), there was a fall of 2.3 percent in the home market Germany in June, although this was less than the fall in the passenger car market as a whole.

In the North American region, the Group recorded significant growth (+9.1 percent) in June, with 83,900 new vehicles handed over to customers. Especially Canada and the USA (+9.8 percent) provided the main impetus for this development. Since the beginning of the year, 461,400 Group vehicles have been handed over to customers in North America, corresponding to a rise of 3.9 percent. The upward trend in the South America region continues. In the first half, double digit growth of 11.4 percent was achieved, with 248,300 Group models. Of these vehicles, 43,700 (+21.7 percent) were delivered in June; growth in deliveries was also recorded as a result of the positive development in Brazil (+12.4 percent).

The Asia-Pacific region reported almost 2 million vehicles handed over in the first half of the year (-2.7 percent). These included 347,000 units (+4.1 percent) delivered in June. In China, 315,300 vehicles were handed over to customers in June, corresponding to a rise of 5.2 percent compared with the previous year. However, the figures for the first half were impaired by theweak first quarter. In the first six months of the year, the Group handed more than 1.8 million vehicles (-1.9 percent) over to customers in China.