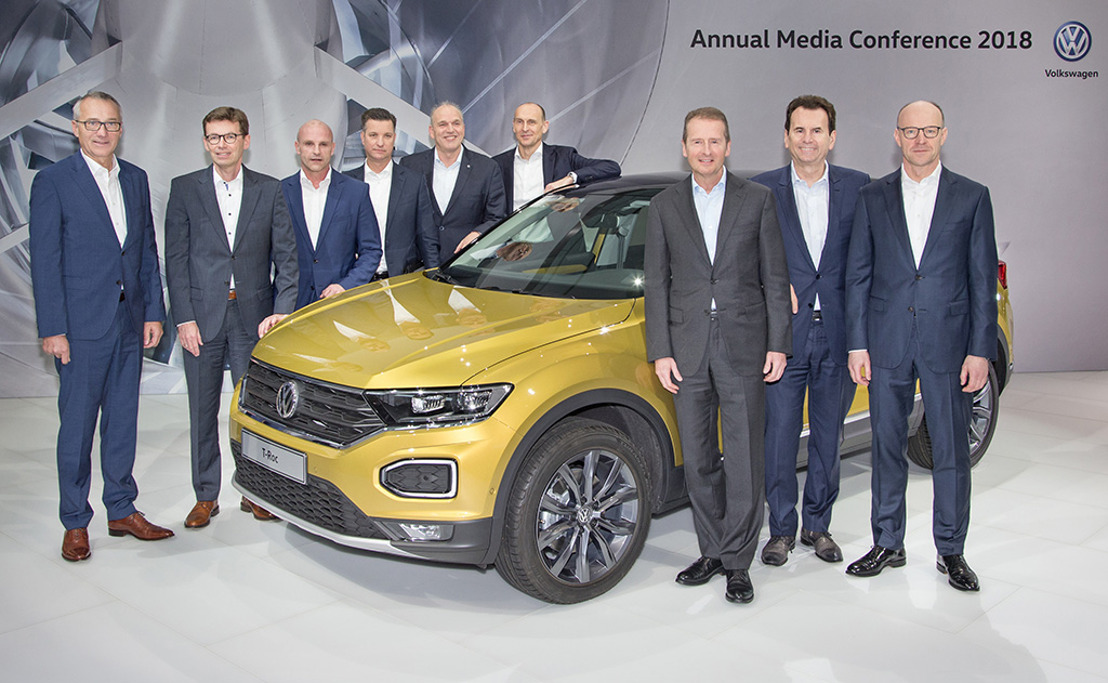 The Volkswagen brand can look back on a successful financial year in 2017. The brand sold 6.23 million vehicles and improved sales revenue to €80 billion. For the first time in five years, the operating result before special items increased, reaching the highest level since 2012, at €3.3 billion. The return on sales (before special items) improved from 1.8 percent in 2016 to 4.1 percent. The Volkswagen brand has therefore outperformed its targets for 2017.

"2017 demonstrated the strength of Volkswagen and its employees. We have turned the trend around and become significantly more competitive in all areas. The implementation of our TRANSFORM 2025+ strategy is making good progress and achieving marked results. From the Zukunftspakt via the SUV offensive to the regional strategies, all initiatives are contributing to good developments at Volkswagen. We intend to use this momentum and to force the pace in the implementation of our strategy in 2018," says Dr. Herbert Diess, CEO of the Volkswagen brand.

In total, 6.23 million vehicles were handed over to customers last year – a rise of 4.2 percent compared with the previous year. Three Volkswagen models, the Golf, Tiguan and Polo are among the world's 10 best-selling cars. Volkswagen recorded the strongest growth in SUV's. Sales of the Tiguan rose by 200,000 units compared with the previous year, to a total of 720,000 vehicles. The Atlas, available in the USA, and its Chinese sibling, the Teramont , already exceeded expectations only a few months after their launch. Volkswagen is also recording considerable demand for the T-Roc, which has been available since the fall of 2017. Every seventh Volkswagen sold is already an SUV and the share is to rise to as much as 40  percent by 2020.

The strong demand for Volkswagen brand products resulted in a significant increase in sales revenue to €80 billion, a rise of about 8 percent compared with the previous year's figure following adjustment for structural changes.

There was also a positive development in the earnings situation of the brand. The operating result (EBIT) before special effects rose by about 77 percent to €3.3 billion and there was a corresponding marked improvement in the operating return on sales to 4.1 percent. Originally, the brand had set a target return of between 2.5 and 3.5 percent for 2017 and had adjusted this forecast to a value slightly above this target corridor in the course of the year. Special effects from the diesel crisis had a negative impact of €2.8 billion on the operating result in 2017 (2016: €5.2 billion).

The main factors in the positive development in result were volume effects and an improved product mix. In addition, it was possible to reduce product costs. In this context, the concentration on the modular transverse toolkit (MQB) is having an effect. In 2017, 40 percent of all vehicles delivered were based on the MQB, about twice as many as in 2015. Over the next few years, this positive trend will become even more apparent. Despite the ongoing model offensive, there was only a slight increase in fixed costs.

The Zukunftspakt is making a key contribution to enhanced competitiveness. The measures agreed on are to have a positive impact of €3.7 billion on the result from 2020 onwards, including €3.0 billion in Germany alone. Last year, all the 9,200 partial early retirement contracts required were signed and these will now gradually take effect up to 2020. Productivity at the German plants was also increased. There were above-average improvements especially at the Wolfsburg (Tiguan and Touran), Emden, Salzgitter and Kassel plants.

The regions were also a key success factor in the 2017 financial year. Volkswagen was able to win market shares in all the major regions of the world and to strengthen its market position with models developed especially for these regions. In the USA, Volkswagen recorded a rise in deliveries (+5.2 percent) for the first time since 2013, despite shrinkage in the overall market. In Russia (+20.4 percent) and South America (Brazil: +19.7 percent), the brand reported double-digit growth. In China, Volkswagen boosted deliveries by 5.9 percent and became the first brand in the world to deliver more than 3 million vehicles in a single market.

Herbert Diess: "We are heading in the right direction. With our improved result, the brand is making a key contribution to the success of the entire Group. However, we are only at the beginning. Further progress in our core business will strengthen our foundation to make Volkswagen a world market leader in e-mobility by 2025.

in 2018, Volkswagen will further intensify preparations for its electric offensive. The new Board of Management division "E-Mobility", headed by Thomas Ulbrich, pools the electric activities of the brand and firmly links this key topic of the future to the Board of Management.

From 2020, the Volkswagen brand plans to introduce an entirely new generation of full electric cars based on the modular electrification toolkit (MEB). Preparations for this offensive are proceeding to schedule. With an investment of about €1 billion, the brand will transform the Zwickau plant into the European competence centre for e-mobility and will produce all the MEB vehicles for the European market there. In future, up to 1,500 MEB vehicles per day are to roll off the production line at the plant. Other competence centers are planned in China and North America. This will mean that the next generation of electric cars will be launched at almost the same time in the three major regions.

The first model in the I.D. family, the Volkswagen I.D., is to be launched in 2020. This is to be followed at short intervals by other models including an electric SUV – the I.D. CROZZ – and the I.D. BUZZ, the bus of the future. With the I.D. VIZZION, Volkswagen gave a glimpse of the future flagship of the I.D. family only a few days ago. The study highlights the considerable potential of the MEB., In addition to the vehicles themselves, Volkswagen is also developing a comprehensive ecosystem from the charging point via green power to digital services. This will make the changeover to an electric car as simple and attractive as possible.

"The strong demand for the Golf shows that the electric car is increasingly making a breakthrough. When the technology and the price are right, customers are ready to change over. With the I.D. family, we will take the lead in the electric movement," says Diess.

Volkswagen made a good start in the 2018 financial year. In January and February, the brand delivered more than 940,000 vehicles throughout the world, outperforming the figure for the first two months of 2017 by 6.5 percent. Especially on the brand's domestic market of Germany, there was again a marked upward trend, with a rise of 13.3 percent in deliveries.

Over the rest of the year, the Volkswagen brand intends to continue the upward trend and further improve deliveries, sales revenue and the result. The SUV offensive will be further intensified, with highlights including the launch of the new Touareg. At the end of 2018, Volkswagen will enter an entirely new segment with the T-Cross. In addition, the brand plans to launch four new SUVs especially for the Chinese market this year.

The brand will continue to work on profitability this year. With the measures agreed under the Zukunftspakt, productivity at the German sites is to increase by a further 7.5 percent. In the regions too, Volkswagen expects positive developments to continue, especially in North America, Brazil and Russia.

This year and over the next few years, the brand will face severe challenges despite its improved competitiveness. These will include the changeover to the new consumption standard WLTP, achievement of the fleet CO2 targets and the run-up of the electric offensive. Despite all these effects, the Volkswagen brand has set itself the target of maintaining or even improving its return on sales. For the 2018 financial year, the brand has set a target corridor of 4.0 to 5.0 percent for return on sales. Sales revenue is to rise by up to 10 percent. Despite the negative effects described, the brand also confirms its return target of between 4.0 and 5.0 percent, which was recently increased, for 2020.

"With TRANSFORM 2025+, we have set out to safeguard the future viability of Volkswagen. Following a good start, we will now force the pace. Our electric strategy is proceeding to schedule. If we keep up the present pace, I am confident that 2018 will be a good year for Volkswagen and that the long-term transformation of the brand will be successful," says Herbert Diess.