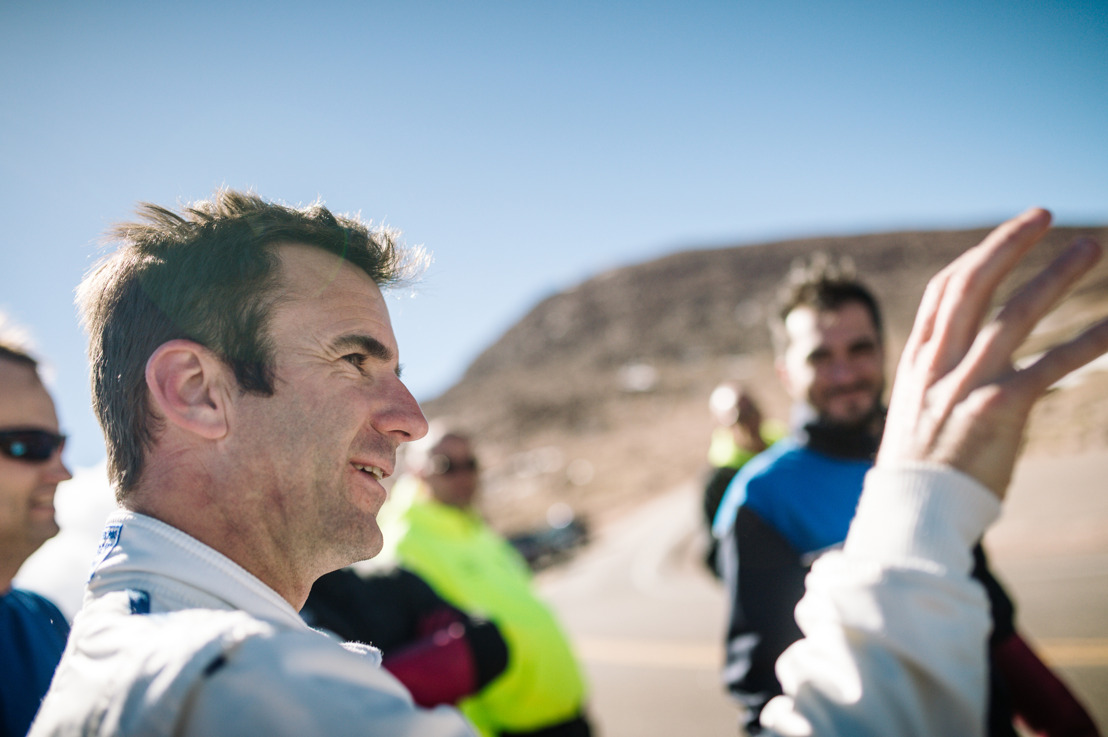 Wolfsburg (18 June 2018). Romain Dumas has won the Pikes Peak International Hill Climb three times already. On 24 June, the Frenchman will contest the most famous hill climb in the world for Volkswagen for the first time. He has one goal behind the wheel of the 500-kW (680-hp) I.D. R Pikes Peak: The 40-year-old is aiming to break the record for electric cars. This currently stands at 8:57.118 minutes and was set by New Zealand’s Rhys Millen in 2016.

Mr. Dumas, your fifth start at the Pikes Peak International Hill Climb is just a few days away. What preparations will you be making in the race week?
Together with the team, I will be working on the final minor details to optimise the set-up, in order to ensure that we finish first. After the practice start on Tuesday, qualifying takes place on Wednesday, when the starting order for the race on Sunday will be determined. Then there are interviews with journalists and an autograph session at the fan party on Friday. But I am also looking forward to having some down time.

You have won the Pikes Peak International Hill Climb three times in the past. Why will you be successful again for the fourth time this year?
The I.D. R Pikes Peak and the team here at Volkswagen are fantastic. It is not an easy project, everything is new and very fresh, but we have gained a lot of experience over the past months and have prepared well together with the engineers and mechanics. I am confident that this will pay off on 24 June.

You said that the Pikes Peak International Hill Climb is more difficult than any other race. What do you mean by that?
From a driver perspective, it is difficult because you can’t afford to make even the tiniest mistake. And you only get one shot. If anything goes wrong, it’s all over. If my tyres get damaged, I can’t make a pit stop, change the tyres and then go back out onto the track. On Pikes Peak, months of work and the related hopes of victory can go up in smoke within seconds.

Do you remember your first drive to the summit?
That was in 2012 before my first appearance. My team and I were relatively naïve as we arrived at the mountain. We learned a great deal with every metre we covered. It was a unique experience. Some of the passages at Pikes Peak are similar to the Nordschleife, but the race is a much greater challenge. I have great respect for this mountain, even today.

How do you feel physically after arriving at the summit at race speed?
Bad, really bad. You climb 1,440 metres in altitude in about nine minutes. You feel it and it does not feel good. It is important to know your body well and give it additional oxygen where necessary. At the finish line at 4,302 metres, the air is so thin that it is difficult to breathe, especially after that exertion.

This year you are competing in the I.D. R Pikes Peak, Volkswagen’s first fully-electric racing car. How is this different from a combustion engine?
The feedback from an electric racing car is very restricted. There are nearly no noises from the engine or the gearbox. Normally, these are important indicators for controlling speed. In the I.D. R Pikes Peak, I only have what I can see outside and my display on the steering wheel. The lack of feedback makes it very difficult, but I enjoy taking on challenges.

Do you think that electric engines are the future of motorsport?
On Pikes Peak, electric engines are definitely the best choice in terms of the performance at altitude. And they also make sense in very short races, like Rallycross. But right now I can’t see it working for endurance races.

As of 2020, Volkswagen is launching its first series with fully-electric engines, the I.D. family. Are you in favour of electro mobility on the road?
Yes, I am a fan. It will be of great advantage to people, particularly in cities, and when the development of batteries progresses further, it could even become of interest for medium and long distances. Motorsport can play an important role here, since experience from the development tasks can help production.

You are 40 years old and have enjoyed numerous successes in endurance races, among others, and have won three times on Pikes Peak. What are your other goals?
That’s a good question. I don’t really have an answer. Of course, I still have goals. I have contested the Rally Dakar three times. I’d like to battle for the win there. And I would also like to try Rallycross