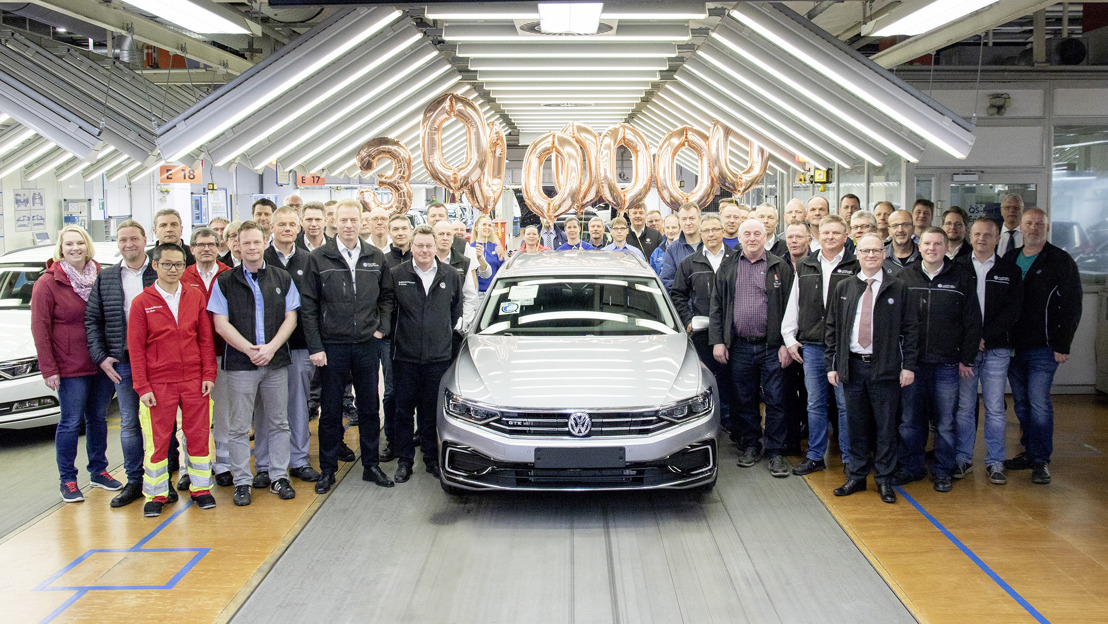 On April 3, the Passat broke the 30-million-model mark for production in the Volkswagen plant at Emden, with the result that the bestseller set a new record in its segment: no other mid-range model and no other business vehicle globally has been sold more often than the Passat. The 30,000,000th vehicle – a Passat GTE Variant with a plug-in hybrid drive and a Pyrite Silver Metallic exterior – is already one of the first models in a new evolutionary stage to feature an extensive technical update (European presales will begin in May). The 30 millionth Passat will be used as a press and test vehicle for the international media over the coming months.

Ralf Brandstätter, Chief Operating Officer (COO) of Volkswagen: “The Passat is one of Volkswagen’s most important and most successful cars – since its launch 46 years ago, 30 million customers have had confidence in this Volkswagen vehicle. As a result, the Passat has become one of the world’s greats; a car which today is as much at home in Beijing as it is in Berlin, Sydney, Johannesburg or on the streets of San Francisco. At Volkswagen we are proud of this successful model, which is still the benchmark within its class today.”

Dr. Andreas Tostmann, Member of the Board of Management responsible for Production for the Volkswagen brand: “We currently produce the Passat on three continents in 10 plants for over 100 markets. That makes the Passat a true global bestseller.”

Volkswagen offers the Passat in various independent versions, depending on the continent. The eighth generation of the European model will be launched early this year as a saloon and a variant with a new technical setup. Thanks to the “Travel Assist” system – a new IQ.DRIVE system, to use the Volkswagen name for intelligent drive systems – the Passat is the first Volkswagen vehicle that can be partially driven with assisted driving if desired, and at any speed (0 to 210 km/h). The new model also includes features such as interactive IQ.LIGHT – LED matrix headlights and the MIB3 modular infotainment module applications with constant online access.

The enhanced Passat GTE will also be of particular importance within the model range as, just like the 30 millionth vehicle, the plug-in hybrid models to come will offer significantly more electrical range in the future2. This is currently at up to 55 km measured using the new WLTP cycle, which corresponds to around 70 km2 according to the NEDC. The new Passat GTE (160 kW/218 PS system output) already achieves the limits set out in the Euro 6d emissions standard, which will apply to new vehicles from 2021.

Volkswagen launched production of the first Passat models in its Wolfsburg plant on 14 May 1973, under the motto “The beginning of a new VW era”. The model heralded a completely new family of vehicles containing water-cooled engines, front-wheel drive and ultra-modern all-steel chassis. Positioned as a mid-range model, the Passat was the successor to the VW 1600 (Type 3 with air-cooled rear engines and rear-wheel drive). In that May 46 years ago, no one in Wolfsburg could have guessed that the Passat would sell 30 million and as such would even outdo the legendary Beetle (21.5 million). Together with the Golf (35 million) and the Beetle, the Passat is one of the three best-selling Volkswagen vehicles of all time.