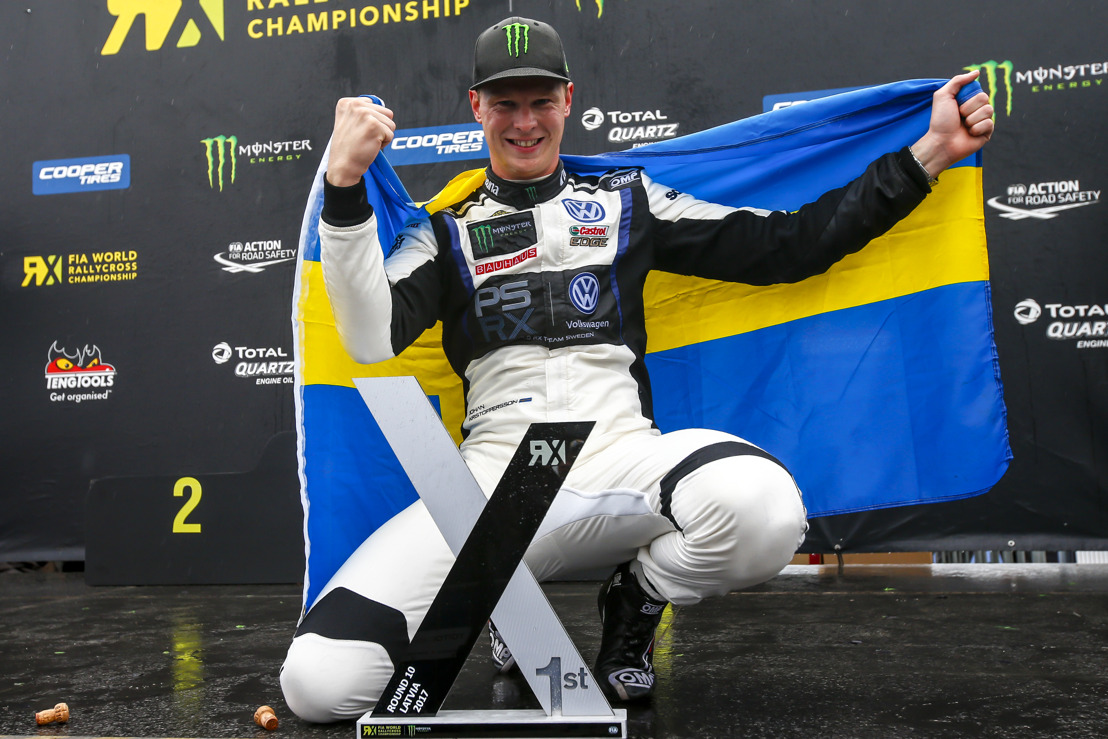 Wolfsburg (18 September 2017). Overcome with joy, new world champion Johan
Kristoffersson wiped tears of joy from his eyes after his major triumph: The Swede not only
wrapped up his maiden Drivers’ title with victory in round ten of the FIA World Rallycross
Championship (WRX) in Riga, Latvia, but also ensured that PSRX Volkswagen Team Sweden
was crowned champion team in 2017. Kristoffersson’s fifth win in a row in the 570-hp
Volkswagen Polo GTI Supercar also saw the man of the hour set a new WRX record. The 28-
year-old produced a commanding display in Riga, once again putting on a show of top-class
driving to finish ahead of last year’s champion Mattias Ekström (S, Audi) and record world
rally champion Sébastien Loeb (F, Peugeot) in the final.

This season, Kristoffersson has made it through to the final of all ten events so far. As well as
demonstrating magnificent speed, the 28-year-old has only ever taken calculated risks, has
driven extremely intelligently, and wrapped up the title two matches before the end of the
season with a spectacular record of six victories and a further three podium finishes. Teammate
and team principal Petter Solberg (N), who fractured his collarbone this weekend in a
crash in the semi-final, also contributed one win and 209 points to the team’s success. The
newly-formed outfit, led by three-time world champion Solberg, has been built around an
impressive team spirit right from the word go: when it came to team tactics, communication
and information, frankness prevailed between the team-mates – a factor that was certainly
instrumental in the success.

The two titles are confirmation of the potential of the Volkswagen Polo GTI Supercar, which
is run by PSRX Volkswagen Team Sweden and was built by Volkswagen Motorsport in
Hannover. The basis for the 570-hp four-wheel drive powerhouse was another Volkswagen
champion: the 2014 Polo R WRC, with which Sébastien Ogier (F) won one of his four titles in
the FIA World Rally Championship. The WRX racer was assembled around the original chassis
of the car used by Ogier and Jari-Matti Latvala (FIN) in the WRC. The engineers also fell back
on an engine that, prior to the WRX project, had been developed for outings in the American
Global Rallycross Series, and which offers the utmost reliability. Since the start of the season,
the technicians at Volkswagen and PSRX have focussed solely on fine-tuning the car – the
conscious decision not to work on the technical development of the car has probably made
the Polo GTI Supercar the most efficient overall package in the World Rallycross
Championship.

Johan Kristoffersson’s fifth win in a row in Riga was a new record in the WRX. His first victory
of the season came at round four of the year in Mettet (B). His team-mate Petter Solberg
then triumphed in the next race at Lydden Hill (GB), before Kristoffersson set off on his
unparalleled run. The speedy Swede has six wins to his name already this season, and the
newly-crowned champion already has his sights set on his next victory in Volkswagen’s
backyard – in Lower Saxony. The Estering in Buxtehude will host the World Rallycross
Championship from 29 September to 1 October.

*Subject to the official publications of the results by the FIA.

Johan Kristoffersson, Volkswagen Polo GTI Supercar #3
“World champion – that is unbelievable. It is an incredible result, and feels surreal. It has not
sunk in yet. Three laps into the final, I started thinking about what might be about to happen.
When I came out of the final corner, I shouted to the team: ‘Have I really done it? Am I world
champion?’ The answer came over the radio: ‘Johan, you are world champion.’ I would like to
say a big thank you to the whole team, which has done an outstanding job all season. The
spirit in our troop is really unique, and everything came together right from the outset.”
Sven Smeets, Volkswagen Motorsport Director

“That was top-class from Johan. He is an absolutely worthy champion – this year, he has
beaten big names like Loeb and Ekström, not to mention his team-mate Solberg. He has also
been reliable and incredibly strong mentally, and has kept both feet on the ground. His world
championship title puts him right up there among the very best in his sport. He also has a
remarkable team behind him, which also thoroughly deserves the title. The newly-formed
team has worked perfectly together, right from the first minute. I have never seen anything
quite like it. However, there is often a thin line between joy and pain in sport. Get well soon
Petter. He is the father of this success, has been very heavily involved in this project, and can
be really proud of his team.”