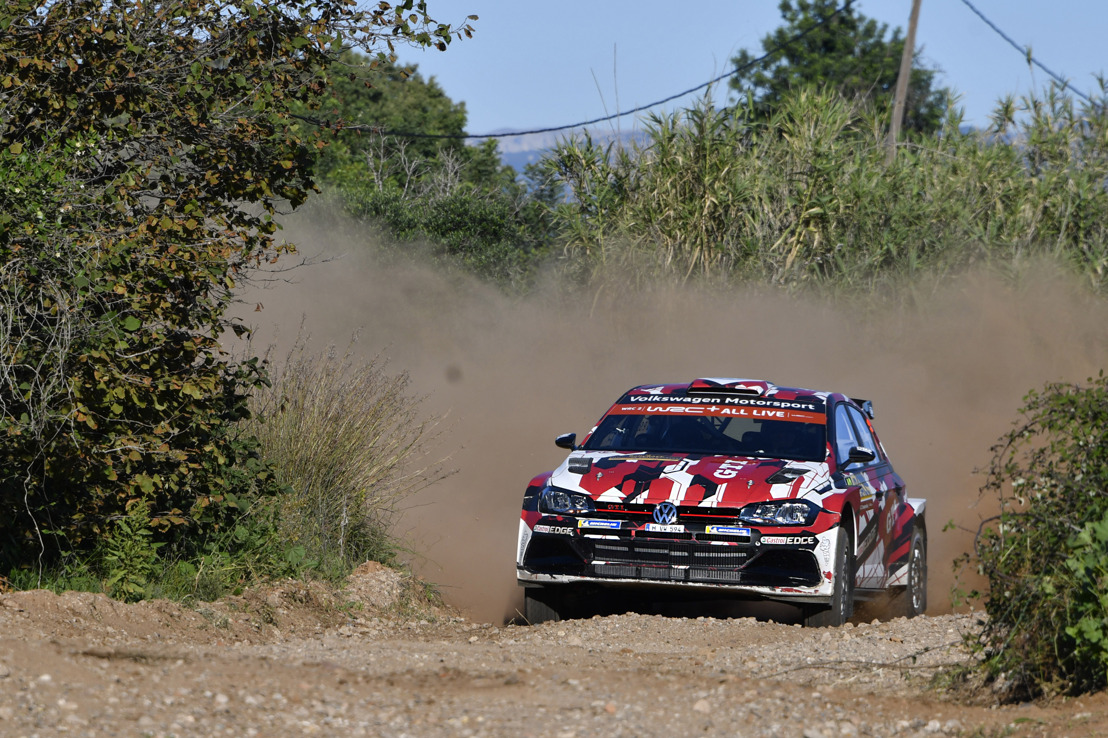 Wolfsburg (25 October 2018). Volkswagen kicked off the competitive debut of the Polo GTI R5 with the fastest time, courtesy of Petter Solberg/Veronica Engan (N/N), and second place for Eric Camilli/Benjamin Veillas (F/F). The much-anticipated first showdown with the strong opposition on the Shakedown at the Rally Spain saw the new customer rally car lead the way: the two 200-kW (272-PS) Polos ended the ‘free practice’ 1.3 seconds clear of the WRC 2 field. The Shakedown was held on a two-kilometre mix of gravel and tarmac. Rally Spain kicks off with the first stage on Thursday evening.

“It is obviously fantastic to start a new project with good results,” said Volkswagen Motorsport Director Sven Smeets. “However, we should not read too much into what is undoubtedly a positive Shakedown result. We are looking forward to the first real head-to-head with the opposition. Everyone in the team is very motivated – especially as we have been given such a warm welcome by the WRC family after two years away and it brings back a lot of fond memories of four strong years up to 2016.”

Besides the racing, what else been going on regarding Volkswagen’s only works outing with the new Polo GTI R5? Here’s an overview.

It is going to be tricky – Silke Hansen predicts a wide range of weather at the Rally Spain
She was an integral part of the successful Volkswagen team that dominated the world championship between 2013 and 2016: Silke Hansen, whose main job sees her present the weather forecast for TV station ARD (Erstes Deutsches Fernsehen). Hansen is also in action at the only works outing of the Polo GTI R5 – and is predicting tricky weather. Sunshine on Thursday, followed by cooler temperatures and cloud on Friday, which could produce significant rainfall on Saturday. And what about Sunday? “It will be interesting to see where and when it rains,” says Hansen. What makes rallying so special for the weather presenter is the direct feedback from the team – with short-range forecasts for the coming hours, combined with an outlook for the entire rally, which is important for strategy. Buzzword: tyre selection.

Wow factor in the service park: Volkswagen’s GTI outing makes an impression
Volkswagen is heralding a new era in customer sport with the Volkswagen Polo GTI R5 at the Rally Spain. The GTI brand is not only synonymous with sporty road vehicles, but also the company’s customer sport programme. The red honeycombs typical of the GTI brand have produced plenty of oohs and aahs in the service park in Salou – for example, the overalls sported by Eric Camilli/Benjamin Veillas and Petter Solberg/Veronica Engan. The Polo GTI R5 itself, which also bears the striking hexagonal design, also received great praise from the fans.

Family get-together in the WRC – Ogier and Mikkelsen pay Volkswagen a visit
A reunion at the scene of shared successes: two former Volkswagen team members did not waste any time before stopping by to say hello at the Rally Spain. On Wednesday evening, the team received a visit from Sébastien Ogier (F, M-Sport-Ford), four-time world rally champion with Volkswagen, and Andreas Mikkelsen (N, Hyundai), who started out as a Volkswagen Junior before becoming the last driver to win a rally with the Wolfsburg-based manufacturer. Cue plenty of backslapping and hugging.

15 titles – world champion trio of Solberg, Loeb and Ogier meet up in Spain
The past three world rally champions, with a total of 15 titles between them, in one rally: Sébastien Ogier (F, M-Sport-Ford), Sébastien Loeb (F, Citroën) and Petter Solberg (N, Volkswagen) are competing together in Spain. While the two Sebs go head to head in the top category of the WRC, Solberg lines up in the WRC 2 category with Volkswagen. In 2003, Solberg became the last Nordic driver to win the world championship. Loeb then won the next nine titles in a row, followed by five back-to-back titles for Ogier.

The Solbergs: An awfully fast family
The last time Petter Solberg raced in the World Rally Championship was in 2012 – at the Rally Spain. This weekend, the 2003 champion returns to the scene of his farewell – in the Volkswagen Polo GTI R5. He will be supported by his motorsport-mad family. You can find a profile of the Solbergs and there racing-dominated life here.

Download: Press booklet with all you need to know about the Polo GTI R5
To mark the return of Volkswagen Motorsport to the FIA World Rally Championship (WRC), the 52-page press booklet “Polo GTI R5 – With the Genes of the World Rally Champion” has been produced. The comeback marks the next step in customer sport – after the TCR project with the Golf GTI TCR on the racetrack, the Polo GTI R5 is Volkswagen’s second customer sport programme